"We will decide on restrictive measures tomorrow, I will suggest two things" VIDEO

"In the last four days, we have a trend of reducing the number of patients, and I hope those are the consequence of the measures we have adopted", Brnabic said. 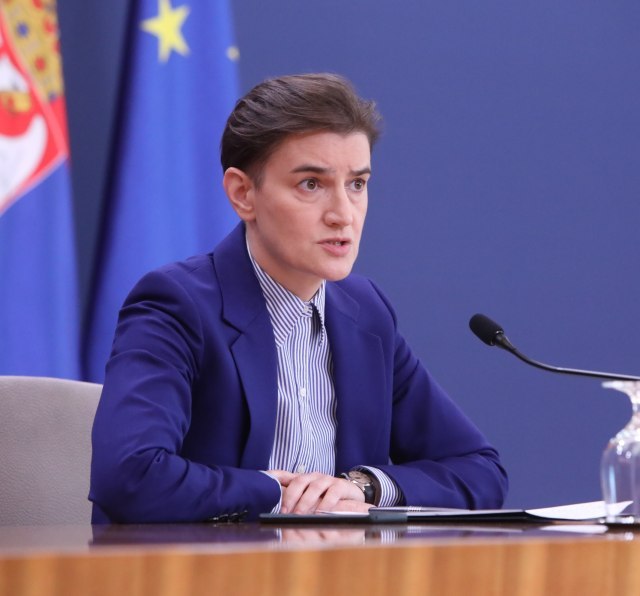 She hopes that wearing a mask will have an effect, and that it is possible that this measure will be mandatory at the level of the whole of Serbia.

Even today was a bad day when it comes to the number of deaths, and the Prime Minister said that there were never more people on respirators and that these were warning data. She said that 49 respirators were sent to places where there was no need to send respirators before.

Brnabic said that she expects to see in the coming days how much the protests and gatherings influenced the spread of the virus.

She appealed to people to avoid gatherings because these are places where infection can easily occur. As she says, the state is ready and we have enough respirators and tests, but nothing will help if there is no responsibility.

"If we do not want to live in a permanent state of emergency, then we must adapt to the struggle. There is no need and there is no reason for politicization," she concluded.

"We are now receiving additional BGI tests and a plane with chemicals from Britain will land at the airport in order to speed up the testing," she announced.

As she said, all parameters are viewed on a daily basis and the right system is being prepared to make the database more up-to-date.

"We made an ad hoc base, the best we had at the time. If I had known we were going to have a fight like this when I became prime minister, I would surely have put digitalization of healthcare in my exposition," Brnabic said, adding that she was working on digitization in the education sector.

Brnabic also announced the opening of a new laboratory between July 19th and 20th in Nis, and will have a capacity of 1.000 samples a day, and said she was making "superhuman efforts" for everyone in the fight against the coronavirus.

"It was easiest to reintroduce curfew, but we tried to fight in some other way," she concluded, adding that we might succeed without such measures.

She mentioned that no country in the region tests as many people as Serbia.

Brnabic said that she would see tomorrow what new measures would be introduced, she would suggest the obligatory wearing of masks at the level of the whole of Serbia, both indoors and outdoors.

"I have not yet proposed it to the Crisis Staff, I will discuss it with the experts," she said.

The other thing she will propose is a ban on organized gatherings, at least for the next two weeks in all local governments.

As she announced, the Crisis Staff will be convened either tomorrow afternoon or the day after tomorrow morning.

The Prime Minister explained that the measures are being taken in relation to what is best for the citizens and the health system.

"I don't think it is good to adopt restrictive measures from March and April, because I think it is very important to adopt habits for further fight against COVID-19. It is important to learn that this is an individual fight of all of us," Brnabic said.

She added that they are working on having a system with detailed data on patients, because now there is only a database that was the best that could be done at the time of creation.

Brnabic warned that the epidemiological situation in Šabac is alarming.

"Sabac had more positive cases in the previous days than Belgrade, and then in the last few hours Belgrade overtook Sabac in the number of infected people," she said.

However, Brnabic said that she was most afraid of protests regarding the epidemiological situation.

"If we wanted to hide data, we wouldn't have created a database"

“We would not have set up the data base if we wanted to hide anything,” she said. "What hurts me most is that if you from BIRN had any honorable intention you would have talked to us about those figures before publishing them. We have no written proof that you tried… You accused us, you published those data and said: No Trust,” she said. BIRN reported recently that it had been granted access to the government’s COVID-19 data base which, it said, showed that the number of coronavirus-related deaths was much higher than officially reported by the government pandemic Crisis Staff.

Brnabic responded to the report on a pro-government TV, saying that anyone who shows coronavirus symptoms but dies when they are hit by a bus are entered into the COVID-19 data base.

In an effort to explain the discrepancies in the officially released figures for infections and deaths and the numbers in the COVID data base which BIRN said it had access to, Brnabic said that the data base was far from perfect, adding that there was no data base before the pandemic and that it was set up in 48 hours.

Stevanovic: The number of patients in hospitals is not decreasing

Stevanovic said that the number of patients in hospitals is not decreasing.

"The largest number of hospitalized people is in the area of Belgrade, in relation to the size and density of the population in Belgrade," Stevanovic said.

He thanked colleagues in hospitals in other cities that received patients from Belgrade.

"Clinicians point out that there is no drug that currently reliably treats COVID, nor a vaccine that protects against this virus. What can protect us at this time is respecting measures, wearing masks, keeping distance and washing hands as often as possible. We must all try to help the health system", Dr Stevanovic said.

The Prime Minister stated that they were certainly wrong in some decisions, but that it happened because very little is still known about the virus, and that everyone predicted that the virus would subside in the summer, but it turned out that this was not true.

"It is not the fault of the citizens, but the virus," she added.

As she stated, the numbers would be reviewed at some point.

Immunologist Jankovic: The rate of collective immunity is still low

Immunologist Jankovic said that it is expected that, as with other similar infections, collective immunity will have an effect, but that it cannot be counted on, because that rate of immunity is still very low.

"The goal is to infect as few people as possible in a certain period of time, and not more, because we cannot count on collective immunity," Jankovic said.

Jankovic said that the only change was that the measures went from mandatory to recommended, but that the strategy was the same all the time.

"All the time, the Crisis Staff's strategy was to prevent the spread of the virus," he said, adding that only the means differed.

Dr Stevanovic said that the elderly are still the most endangered, but that now there are a lot of young people who are infected, and that they have now transmitted the virus to family members.

He said that there are also asymptomatic cases, but that the clinical picture and symptoms mainly depend on age.