"I do not rule out the possibility of introducing state of emergency, but ..." VIDEO

Serbian President Aleksandar Vucic states that the introduction of a state of emergency implies complete isolation. 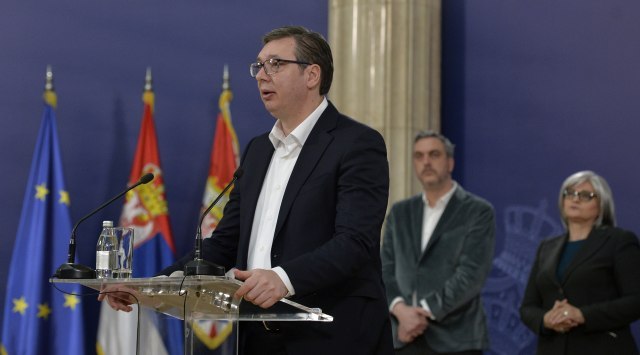 “The state of emergency involves complete isolation, and the question is how much time you can spend in complete isolation. That is why it should always be kept to the last, but the first necessary moment”, Vucic says.

He states, however, that he does not rule out the possibility of introducing a state of emergency and adds that he knows what that means.

"I do not rule out the possibility, but the second when it is introduced, there are no more cafes, theaters, bars. Then the army goes to the streets, and others to the borders", Vucic said after the Crisis Staff meeting to eliminate the possible and harmful effects of the coronavirus to economy.

He added that the state of emergency is introduced by the procedure which prescribes sending a letter to the President of the state that the security of citizens was threatened.

"It goes further into the National Assembly, but given the ban on gathering more than 100 people indoors, it is possible for the President of the Republic, the Prime Ministers of Serbia and the Assembly to introduce a state of emergency with a triple signature," Vucic said.

He announced that a call will be made today to retired doctors in Serbia to help prevent the spread of coronavirus.

"When that larger number of infected people come to us, and the present state of affairs is, conditionally speaking, nothing, given the crisis that is going to affect us, we have to be prepared for something much more difficult. This is the most difficult challenge for us in the last few decades because we cannot count on anyone's assistance, and that is why we need to take care of ourselves. Everyone in the world is in a panic and in a worse condition than we are", Vucic said, adding that more measures would be taken to combat coronavirus outbreak.

After a session of the Crisis Staff to eliminate emergent and prevent possible adverse consequences for the COVID-19 infectious disease on economy, he indicated that experts confirm that the elderly are the most vulnerable group.

"I ask our oldest citizens not to go out, I ask people from the gerontology centers not to let pensioners go to the shops, let the younger provide them with what they need. The pensioners, they are the most disciplined, but also the most vulnerable, should not to go out", Vucic said and reiterated:

"Retired people, I urge and plead on you to stay indoors. We will find a way to deliver food and everything you need. No one will starve to death." Vucic said that 41 people were infected in Serbia today, confirmed by tests, but there are no doubt that there will be more.

"What is good news is that only 21 people are hospitalized, only one of them is on a respirator," Vucic said.