The President of Serbia, Aleksandar Vucic, said that he had a difficult conversation in Paris, and that the Germans and the French would issue a joint statement 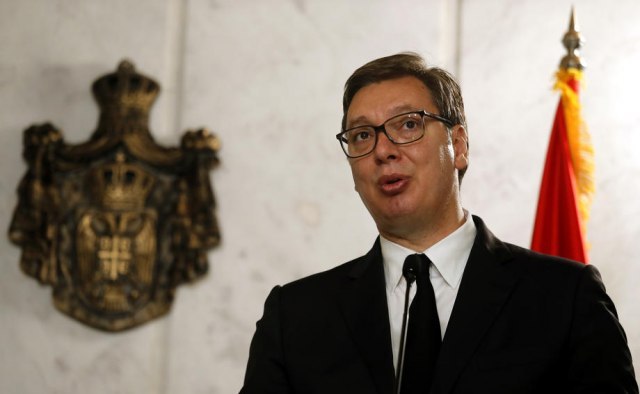 He told reporters that Serbia does not accept Pristina's ultimatums, and that we should try to act bravely.

"The Albanian side came out with demands, such as preserving the territorial integrity of Kosovo, preserving the Constitution and the constitutional organization of Kosovo, lasting mutual recognition, opposing the model of two Germanys, UN membership and other European countries recognizing Kosovo. Only after that, will they deal with the issue of missing persons and war damage", Vucic said.

He announced the resumption of the dialogue on Thursday in Brussels, and that he was proud of the Serbian delegation.

"We presented the facts on several occasions, some delegations only repeated what they had written," Vucic said.

Vucic said that we would be exposed to great pressures and at the same time, we would encounter a "completely unrealistic approach of Kosovo Albanians who would like to get everything, and Serbia would be left with nothing".

"We are ready to discuss all steps that would improve the relations between the people, the flow of people, goods, capital, but we are not ready to accept ultimatums. That is not possible and realistic," Vucic said.

As he said, the continuation of the dialogue will be under the leadership of the EU Special Envoy for Dialogue, Miroslav Lajcak.

"We are participating in a dialogue under the auspices of the EU, that is important for us," he concluded.

He stated every point that Serbia fulfilled from the Brussels Agreement and stated what Pristina did not fulfill.

"They said that the Association of Serbian Municipalities is not in accordance with their Constitution. If you are not able to fulfill that for 7 and a half years, how do you intend to fulfill something else," Vucic wondered.

"Those who thought that they would take everything from Serbia, without Serbia getting anything... Our argument was very strong, we were very well prepared for the summit," he said.

He adds that he cannot say that Serbia was exposed to pressure from Marcon and Merkel.

He says that he tried to respond to the demands and "wish list" of the Albanian side in a brave, rational and pragmatic way today, and that he believes that Merkel and Macron understood that.

"We will have to talk, but it is not easy to talk to someone who lives outside reality. When they say that their goal is to repeal Resolution 1244, we ask what the Serbian interest is, they say" well, we don't know "... Anyway, "It's not an easy time ahead of us, but we will fight and protect the country," Vucic said.

The Video Summit on Kosovo and Metohija, hosted by the President of France Emmanuel Macron and the Chancellor of Germany Angela Merkel, was held today.

The EU Special Envoy for the Belgrade-Pristina Dialogue, Miroslav Lajcak, the EU High Representative for Foreign Affairs and Security Policy, Josep Borrell, and the Prime Minister of Kosovo, Avdullah Hoti, also took part in the Summit.