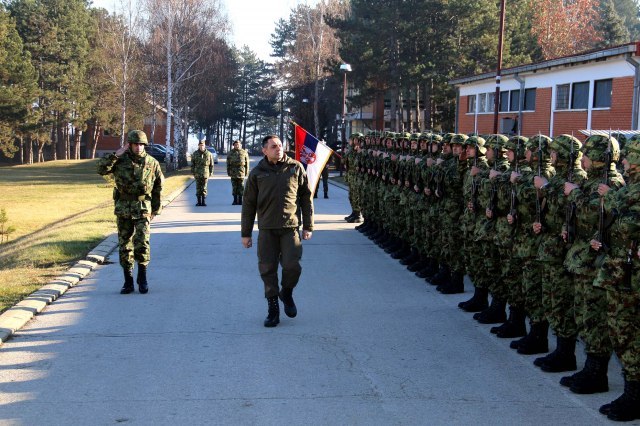 Vulin also said that the Serbs in Kosovo and Metohija can feel reassured,and have absolute support of the president and the Serbian Army, because there is no higher interest for the state than "the preservation of Serbs in the territory of Kosovo and Metohija."

"The task of the Ministry of Defense and the chief of the General Staff is to ensure that the Serbian Army is capable of fulfilling every order of the supreme commander (President Vucic). Each decision that is made, will be carried out. Aleksandar Vucic has repeatedly and loudly, in watershed moments for this country, said that (Operation) Storm will never happen again," Vulin told TV Pink on Friday, referring to Croatia's 1995 offensive against ethnic Serb areas.

Vulin stressed that "Serbia will never allow Storm, Jasenovac (Croat WW2 death camp for Serbs, Jews, and Roma) to be repeated, and for the destruction of our people to take place with impunity."

"It's more than a clear message to anyone who would ever think about the idea to use violence in order to do something in Kosovo and Metohija," he added.

"Knowing Aleksandar Vucic, he always faulted President Milosevic and the leadership of Serbia at the time for the fall of Krajina (an ethnic Serb region in Croatia), believing it to be unforgivable and unacceptable that destruction of the Serb people should pass without the reaction of the state of Serbia," the defense minister said, repeated that for this reason, "there is no possibility of Storm repeating, not while Aleksandar Vucic is at the helm of our state and army."

He recommended that citizens should feel calm and secure, because the Serbian Army is strong, organized and ready to carry out every order.

"When it comes to Serbia, everything is being done to avoid violence. Serbia wants peace. Our representatives and political leaders have done everything to have peace," Vulin said.

"The so-called Kosovo army, made up of terrorists, is being created to attack Serbia and the Serbs. It is certainly not being created to go to war with Albania, for example, or to counter the malign influence of Montenegro in the territory of Kosovo and Metohija, or to possibly stop the North Macedonian aspirations in Kosovo and Metohija. There is no other reason. Our citizens can feel reassured. They can be sure that they have absolute support of the president of the state and of the Serbian Army," Vulin said.

According to him, although Ramush Haradinaj says that this is actually an army that will prepare people to go to Afghanistan and Syria, "there is no need for it because Albanians from Kosovo and Metohija are already in the ranks of Islamic State as the most represented in terms of the ratio against the number of inhabitants."

Vulin stressed that Haradinaj's goal is to provoke conflicts on a wider scale, "so that he can finally once again play the victim and attract the support of the international community - the same ones who recognized them, and who are arming them, who constantly protect and defend them, who are saying that both sides should reconcile and refrain from reacting."

"That's all they ask for, to be the victims again and to say that the great and powerful Serbia has attacked them poor and small ones, 'defend us'. Die in our wars, lay down your life for Ramush Haradinaj's narco clan. We cannot allow that. I am grateful to the Serbs with Kosovo and Metohija for understanding this, and for so wisely and boldly dealing with everything that is happening these days," Vulin said.

He emphasized that the ultimate goal of everything that has been happening in the last few months is for the Serbs to leave the territory of Kosovo and Metohija. "Every day they raise tensions. Every day they make life impossible. And one day you wake up, you look at your children and say - there's no bread again, they're threatening to raid again, let's get out of here. They want to force the Serbs to start leaving on their own. To succeed now at what they've failed to do during all these years," Vulin said.

He said he was grateful to the Serbs in Kosovo and Metohija for having the courage, wisdom and stubborn persistence not to leave.

"They can be sure of the absolute support of the president of the Republic and the Serbian Army, and each state body, because there is no higher interest for us than the preservation of Serbs in the territory of Kosovo and Metohija," Vulin said.