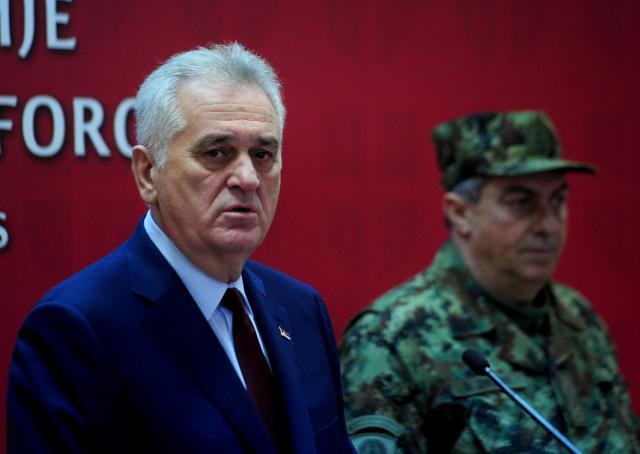 He said the reactions of EU officials to his statements made on Sunday after a meeting of the Council for National Security were "deception."

"The EU should have reacted when the railroad was almost mined and when a Serb train was not allowed to pass. Well, if (EU Commissioner) Johannes Hahn says that I am not looking to the future and that the future of Serbia is an independent Kosovo, then there's nothing for us to talk about. Then he is deception for all times, and what the EU is doing is deception," Nikolic stressed during his interview with Belgrade-based tabloid Kurir.

When the interviewer said that his statements have "upset people," the president replied: "People in Kosovo and Metohija got upset when they saw members of (Kosovo police unit) ROSU."

"We are not saber-rattling but switching to that plane in case the Serb people in Kosovo and Metohija are threatened. And yes, I said that if need be I will go to war, as well as my sons."

Serbia will defend Serbs in Kosovo, Nikolic said, "and there is absolute agreement on this between the government and the president."

"And me saying we will send the army - that's the conclusions of the Council for National Security," said Nikolic.

Asked whether "all this has to do with the (presidential) elections," Nikolic replied: "Surely you don't think I've constructed this myself, I'm not even a candidate yet."

"I'm talking about this as the president of Serbia, not as a candidate, and I care about the lives of Serbs in Kosovo and everywhere, not about my rating," Nikolic said.

He noted that his sons were too young during the wars in the former Yugoslavia, but that his son Radomir volunteered to serve in the army five days before the start of NATO's bombing of Serbia in March 1999.

"I would want to protect Serb children from everything, without sparing myself. However, if they attack Serbs (in Kosovo) and the exodus and the killing starts, will Serbia be silent? I would not be the president of such a Serbia," Nikolic said.

According to UN Security Council Resolution 1244, Serbia could deploy up to 1,000 soldiers in Kosovo, he observed.

"However, the Serbian government never requested that, in the meantime all high representatives have been working on (Kosovo's) independence. That is our trump card in all negotiations with Albanians, why (Kosovo police unit) ROSU cannot come to northern Kosovo - because we agreed that we will not ask for our army to go there," said the president.

Asked "whether that is merely an oral agreement," Nikolc said that regardless, "these agreements are respected."

"We promised orally, regarding ROSU we signed an agreement. They (Pristina) trampled on it and now we have many trump cards for the negotiations in Brussels, where we should seek guarantees that ROSU will never come (to northern Kosovo), that the agreement will be respected, because then we also respect our promise not to ask the UN to enable the presence of the Serbian armed forces who would guard religious buildings and the Serbian heritage," he stressed.

Commenting on the provocative statement made by Albanian PM Edi Rama about Serbs being able to travel to Kosovo only as tourists, Nikolic said that "Albania's pretensions toward Kosovo and Metohija, Montenegro, Greece and Macedonia are well known."

"It's an old story but the foreign policy is conducted by the government, and I don't want to provoke with my statements, but show how much I support it. PM Aleksandar Vucic has clearly stressed that we will not allow any Serb to be killed in Kosovo and Metohija. As the commander-in-chief, I fully support him - if they attack us we will react," Nikolic said.