Swedish PM: We're in EU, but not in NATO, and it works

Swedish PM Stefan Lofven said in Belgrade on Tuesday that his country has chosen to join the EU, but not NATO, and that this arrangement was working well. 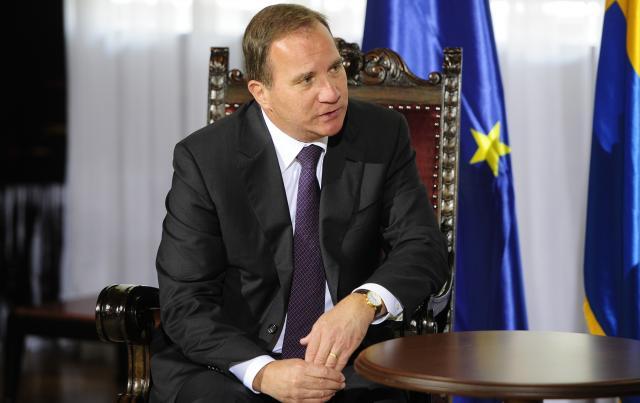 Speaking during a joint news conference with his host, Serbian PM Aleksandar Vucic, he remarked that Sweden's neighbor Finland made the same choice.

As for Serbia, Lofven said that "the path that it has chosen, the European path, is the right one - because it will bring stability."

He commended the Serbian government's and Vucic's efforts to achieve regional peace and stability.

Asked how he saw the situation in the region, Lofven replied he could not say what needs to be done to achieve lasting stability, as this "depends on relations, above all economic, between the countries of the region."

"I'm not the one who should tell Serbia what to do, we can offer our support and we support Serbia's striving to achieve stability," the head of the Swedish government said, and added:

"If you remain focused on that - and I see that the prime minister is - you will find a way."

Lofven then noted that Sweden was also striving for stability, and for that reason believes that a wider perspective is need, "in the sense of stability for ordinary people in their ordinary lives."

Speaking during the news conference, Lofven said he was convinced the path Serbia had chosen - the EU path - was the right one, noting Belgrade would have Sweden's full support on the matter.

After a meeting with Serbian counterpart Aleksandar Vucic, Lofven told reporters he was grateful to him for a very good welcome.

Lofven held a closed-door meeting with Vucic, as well as a meeting with the delegations of the two countries.

"I do appreciate and acknowledge the progress that Serbia has made, and that the government of Serbia has taken on the great challenge here of modernizing, reforming the country, the economy, and it has given results, there have been good results of that and that is very important," Lofven said.

"For enterprises, the private sector, it is very important to see predictability, transparency, public finances in order - those are things that are good incentives for investments and a good economy," Lofven also said.

"You have proven you deliver on that and you will keep on doing that," he said.

"I am convinced that the path that Serbia has chosen - the EU path - is the right one because that will also create stability and order. Serbia has the full support of Sweden on the EU membership, and we will support you during this journey and, whatever we can do to support that, let us know and we will do that," Lofven said.

Lofven said he had also discussed with Vucic economic issues and growth, as well as the issue of migration.

"We commend Serbia's responsibility... It is absolutely essential that Europe can solve this issue together... There is only one solution, that is a common solution. We have a very serious migration and refugee crisis around the world - the biggest refugee crisis since WWII. It needs to be solved in a European context and in a global context," he said.

We discussed the future of Europe, and we both think it is very important, Lofven said.

Serbia respects the territorial integrity of Bosnia and Herzegovina (BiH), but it advocates preserving Republika Srpska within BiH and it will do everything to ensure peace in the region is maintained, Serbian Prime Minister Aleksandar Vucic said Tuesday at a press conference with Swedish counterpart Stefan Lofven.

When asked by a Tanjug reporter if he had discussed with Lofven the situation in the region - in particular the most recent statements by BiH and Republika Srpska (Serb Republic, RS) leaders and Party of Democratic Action press releases about a referendum on the issue of RS Day - Vucic said the topic had been discussed, but that, this time, too, he had not spoken ill of others.

"I spoke about maintaining and preserving peace and stability, and I said Serbia would do all it could for that to happen," Vucic said.

If people live better, no one will want conflicts, Vucic said, expressing the hope that others would think in the same way.

That is the only policy that makes sense, Vucic said.

The relations with BiH were practically the main regional topic of the meeting because everyone feels where most of the problems lie, Vucic said.

Sweden has always supported Serbia on the European path and it always acts as a friend wishing to help, Vucic also said on Tuesday.

Vucic said the two countries had exceptional political relations, and expressed the hope that the modest economic ties would be enhanced and that there would be more Swedish investments in Serbia.

He thanked Sweden for its support for Serbia's European path.

"That is our strategic goal, and Sweden is one of the countries that have always supported Serbia and been among the key partners," Vucic said.

That assistance is not unconditional because we must change ourselves, Vucic said.

The steps that are ahead for Serbia range "from improving our legal system and democratizing our society to economic reforms. We know that well and we are harsh on ourselves, sometimes even harsher than the EU, but Sweden is exerting no pressure and it always acts as a friend and looks for ways to help us," Vucic said.

Vucic said he had also discussed with Lofven regional and geopolitical issues and maintaining peace in the region.

"We established that preserving peace and stability is crucial and that it is the basic condition for economic progress and better life in Serbia and the countries in the region," Vucic said.