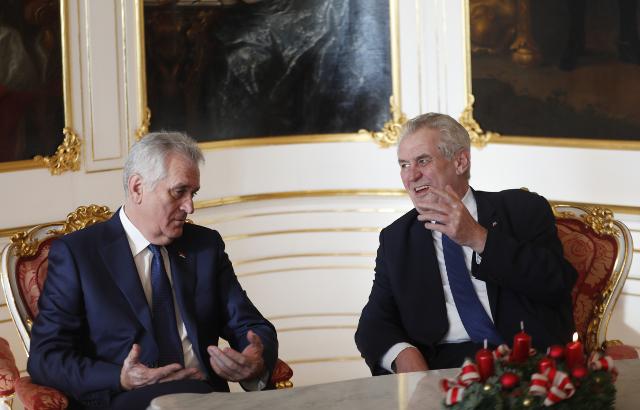 Nikolic is seen with Zeman in Prague on Tuesday (Tanjug)

Angering both the EU and Russia, he continued, is a sign that Serbia is "right."

"Don't think that this view of ours didn't make Russia and the EU angry. Wherever you turn, someone's angry. Perhaps that is a sign that only Serbia is right," Nikolic told reporters.

The Serbian president - who was praised and supported by Zeman because of Serbia's decision not to join anti-Russia sanctions - noted that the EU imposed these sanctions over Crimea.

"Whereas, who imposed sanctions on EU states over the (1999) bombing of Serbia? Or could it be there is no equality for us in this world, so depending on the state you live in you will have more or less equality, depending on the nation you belong to? For as long as I am president, I will always be against us introducing sanctions anywhere and against anyone," Nikolic said.

The president also "appealed on anyone who is considering doing this to first travel to a country under sanctions and see how the ministers and the rich live, and how the people live."

He described sanctions as "pressure to remove authorities in a country, which becomes meddling in the internal affairs, which nobody wants."

"The EU cannot count on forcing Serbia to join sanctions whenever somebody in Brussels wants it," Nikolic said, adding that he hoped Brussels and Moscow would "make up" by the time Serbia becomes an EU member.