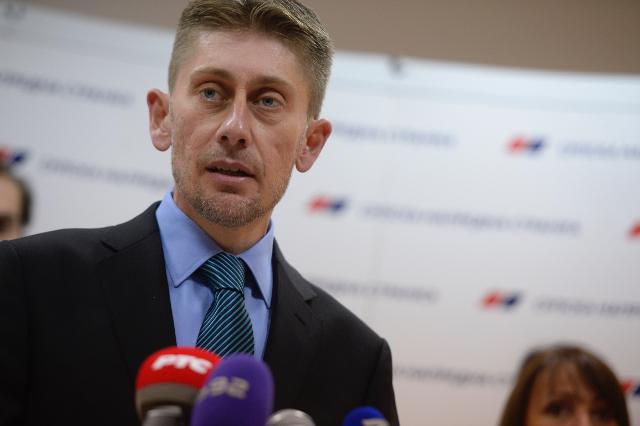 The SNS official did not mention leaders of the SDS-LDP-LSV coalition - Boris Tadic, Cedomir Jovanovic, and Nenad Canak - when he spoke about the criminal complaints.

He added that the Progressives (SNS) "will not allow unrest and a repeat of what happened on October 5, 2000" - a reference to opposition protests that resulted in the ouster of Slobodan Milosevic and his regime. According to Martinovic, the party will also "not allow anyone who did not win (at least) five percent of votes to enter parliament."

Referring to the reaction of Dveri leader Bosko Obradovic to RIK's announcement that his coalition had received 4.99 percent - what later transpired to be a single vote short of the 5-percent threshold - Martinovic said this behavior was "unprecedented in the history of modern democracy in Serbia."

He described the opposition as being "ideologically empty," and Bojan Pajtic and Sanda Raskovic-Ivic of "losing their political compass." The SNS official also referred to Pajtic as "the greatest deceiver."

"The DSS-Dveri coalition has nobody to blame for receiving 4.99 percent, according to the RIK results. Are we supposed to abolish the 5-percent threshold now? There are many illogical things, they all said during election night that (SNS leader Aleksandar) Vucic and RIK were stealing votes, yet they didn't file a single appeal. Now all of a sudden they're surprised at who did file appeals," said Martinovic.

He then added that "Vucic was right when he said they (the opposition) would all gather into one heap, " noting that he found it "incredible" that Pajtic was calling on his voters to vote for DSS-Dveri at those polling stations where elections will be repeated.

"Pajtic has lost his compass, he is trying to hide the debacle of his policy by deceiving citizens about the SNS organizing electoral theft. What's supposed to happen now, a civil war, a repeat of October 5, the scenario from Kiev?," asked Martinovic.