BELGRADE -- President of Serbia, Aleksandar Vučić, said that he hoped that an agreement between Belgrade and Priština would be reached last night.

BELGRADE -- President of Serbia, Aleksandar Vučić, said that he hoped that an agreement between Belgrade and Priština would be reached last night. 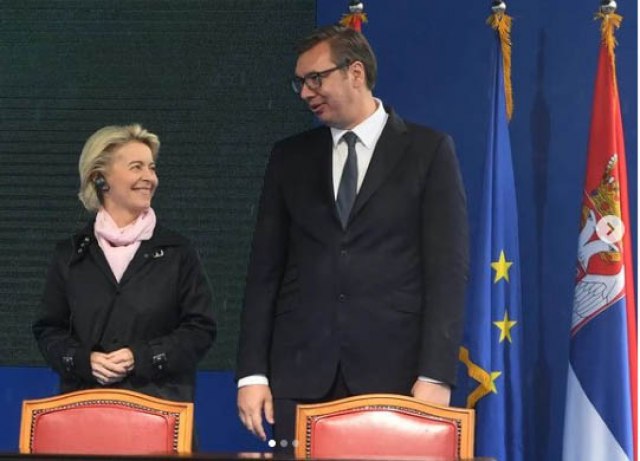 He reiterated in Nis that the dialogue that was held yesterday in Brussels between the two delegations was unsuccessful.

"We never condition talks and dialogue under the auspices of the EU, this is for us something that is basic and to which we are committed," Vucic mentioned.

He said that he could not speak in detail about the negotiations that were led yesterday by the head of the Office for Kosovo and Metohija, Petar Petković.

"I want to believe that we are not far from solving the current problem, and I hope that we will be able to avoid possible future problems, which is important for us and for the Albanians," he said.

The crisis was caused ten days ago by Kosovo’s decision to introduce mandatory temporary license plates for vehicles crossing from Serbia as a reciprocal measure to Belgrade’s rule for vehicles from Kosovo for years.

Vučić warned that any kind of destabilization has a bad effect on the entire region.

"Every kind of problem makes a big problem for all of us in attracting investments and everything else," he said.

Vučić mentioned that Serbia will have to fight for its interests.

"We will not be granted EU membership until we fully resolve our relations with Pristina," he said.

Today, the President of the European Commission continued her visit to Belgrade as part of her visit to the Western Balkans region.

I did not receive any signals about that from the EU, I also talked to Mrs von der Leyen, said Vučić, talking about the possibility of abolishing visa-free travel to the European Union for Serbia.

"I don't think it would be strategically smart for the European Union either. It would be desirable for them to show their attractiveness to everyone, I believe in the words of President von der Leyen that they sincerely want Serbia in the EU," he said.