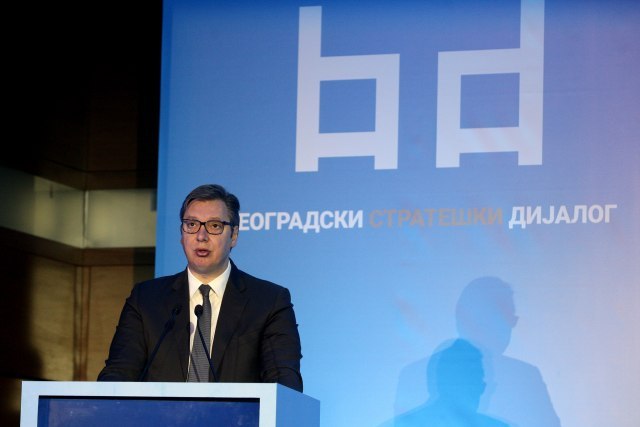 The conference is held in the Club of Deputies.

Vucic said that it was time to talk more openly about two things: how we see relations in the world, and secondly - the position of Serbia is in the future, and how we will react to political, economic and health challenges. "For days and weeks, I made analyzes of everything that happened and what could happen. We have challenges ahead of us," Vucic said.

"Drastic changes have taken place in the world, in strength and what impact the world blocs will have in the future," he assessed.

Vucic pointed out how the pandemic affected the economy and assessed that Germany and China are coming out of the pandemic with great strength.

"China was the first to cope with the pandemic, the desire to continue what was the American desire - that is globalization and taking the position of a key player in globalization. It managed to show a dose of solidarity that many could not show," Vucic said.

He pointed out the consequences of the pandemic in the United States, but he estimated that it would recover economically faster than small countries. "In these conditions, speaking in the political, economic and military sense, the United States, China, Europe, primarily Germany and Russia stand out," Vucic said, adding that we can expect a higher level of solidarity from those countries.

Vucic said that he was the first to point out such a position of forces in the world, and added that, as Serbia, we will not accept the role of being obedient, no matter how small we are.

"While Serbia was absolutely the most unsuccessful, when we lagged behind Montenegro with the average salary, and Bosnia-Herzegovina, it did not bother anyone at that time," he said.

Speaking about the situation in the region, Vucic said that the idea of traveling only with an ID card failed, because he "did not have a tutor".

"Everyone thinks that they have the right to talk about the solution of Kosovo and Metohija, all world and regional powers. However, if we said one word about them, they would say that we are interfering in internal affairs of other countries", Vucic said.

He said that his guilt was that he was not allowed to hide his contempt for those who showed such an attitude towards Serbia because of history.

"They consider that we are a mat on which they can wipe their dirty feet, to step on us," Vucic said and added that he could not say everything he thought because he is the President of Serbia.

"It is of utmost importance for us to watch what is happening around us," Vucic said.

However, he concluded that Serbia has its own strategic path to the European Union.

"We remain on our way to the European Union, we will cooperate with China," he said, adding that in the future he would respond to anyone who objected to that cooperation.

He added that we need to "get out of the shadow of the big ones".

"When they can't blame Macron or Kurz for something, let's step on Vucic. It's not a problem for me to bear the brunt personally, but Serbia feels the consequences," he concluded.

The conference is being held as part of the "Belgrade Strategic Dialogue" initiative, and as the organizers announced, it will be dedicated to analyzing the geopolitical, economic and health aspects of the coronavirus pandemic through three thematic panels.