TIRANA -- The meeting of the Western Balkans leaders in Tirana was completed and, like the previous one in Ohrid, was marked by "mini Schengen"

TIRANA -- The meeting of the Western Balkans leaders in Tirana was completed and, like the previous one in Ohrid, was marked by "mini Schengen" 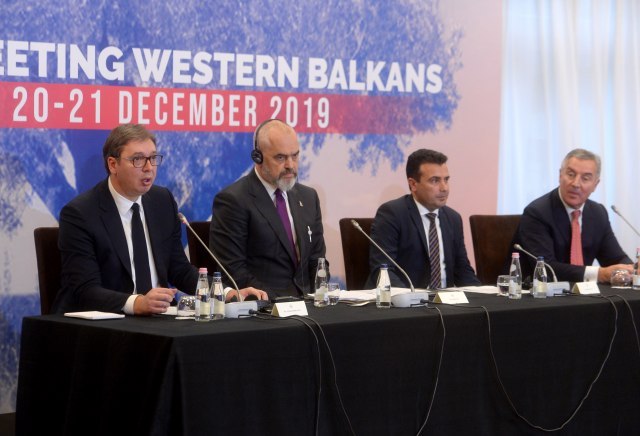 After the summit, Serbian President Aleksandar Vucic said important decisions were made at the meeting to promote trade between the three countries, which will be signed in Podgorica or Belgrade, depending on the agreement.

"We discussed how to improve trade, facilitate the flow of goods, services and capital, and make important decisions. This is of great importance for the entire region," Vucic said at a joint conference.

He noted that, in addition to the fact that veterinary and phytosanitary inspections at the border between Serbia and North Macedonia will be open 24 hours, customs teams will also have a meeting in the next period to facilitate customs clearance and further reduce waiting at the border. In that regard, he added that it would increase the number of lanes and scales at border crossings, so that trucks would pass incomparably faster - in six or seven instead of 23 hours.

Vucic stated that the agreement on the so-called privileged operators, which Serbia and Albania will sign bilaterally at the next meeting, which implies that certain already recognized companies can cross the border more easily.

"The crossing of Presevo - Tabanovce crosses 320,000 trucks a year. Then you see the benefit to all of them", Serbian President said.

He reiterated that it is of great importance and, therefore, they want to try to create as unique a labor market as possible, which will mean a convincingly greater investment attraction.

This, he said, means that workers from Serbia who want to work in Albania or North Macedonia will have the opportunity to register and have a permanent work permit in both countries, which will be in effect the other way around.

"This is of great importance for all our countries that have a problem with the labor market and will only face problems," Vucic said, adding that such a single labor market would be much more attractive instead of having separate markets.

In a statement to Serbian media, he expressed his belief that much would be done by the Belgrade summit to the benefit of the Serbian people and the state of Serbia, as well as Albania and North Macedonia.

"Through discussions with representatives of international organizations, we have asked for support and assistance, as well as for a new growth agenda with the World Bank. We have also sought support for projects such as the project for the lower Drina basin concerning Serbia, Bosnia-Herzegovina and Montenegro, but also for new one EBRD and EIB projects respectively", Vucic said.

Albanian Prime Minister Edi Rama says the European Commission is ready to allocate € 1.2 billion next year to countries in the region to implement the agreements reached under the so-called "mini Schengen."

"These are not loans but grants," Rama said at a joint press conference after the meeting.

Aleksandar Vucic announced that the Serbian government will make a decision on Monday to help Albania with a significant, large sum of money, after a devastating earthquake that recently hit the country.

Vucic reiterated his condolences to all the families killed in the quake that struck Albania, stating that Serbia had helped as much as it could by sending units of the Emergency Sector.

He also announced that in the future, the emergency units of Serbia, North Macedonia and Albania will cooperate closely when a tragedy occurs in one of the three countries, and all available forces will be available to the affected country at the same time.