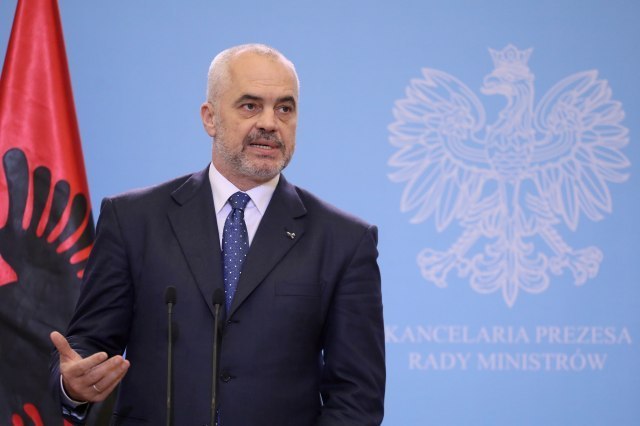 Haradinaj claimed that Rama would "share the sum of ten billion euros with Vucic and Thaci, for dividing Kosovo", the KoSSev website reported.

In addition, the Albanian Prime Minister also revealed what French President Emmanuel Macron allegedly told Kosovo's Prime Minister in Berlin. “Mister (Ramush) Haradinaj will have to appear before a Kosovo court and prove his accusation about 10 billion (euros) which I, President Thaçi and Serbia’s President Vucic would share”, Rama told the “Opinion” political talk show, as quoted by Gazeta Metro.

Rama said it was not the first time that Haradinaj “tells lies” about him.

"He had lied blatantly following the Berlin Summit, when he said that back then in Berlin I had exerted more pressure on him than the others, asking him to lift the tariffs on goods from Serbia and Bosnia. I have never asked him to do that, I've just said to him: "Ramush, this is one-time offer you've got from Emmanuel Macron", Rama explained.

"Today, he was able to provide visa liberalization for his people because Macron in Berlin, before my eyes, in the presence of Merkel, Thaci, Vucic, Brnabic, explicitly said, 'Ramush, give me and Merkel four months to engage in dialogue and suspend fees', no one told him to abolish the fees, 'Serbia will cease derecognition campaign, and even if nothing happens in four months, I will veto it and Kosovo will get visa liberalization'. I told him to accept that offer" , Rama revealed.

Namely, after returning from Berlin, Haradinaj accused Albanian Prime Minister Edi Rama of pressuring him to abolish the fees, claiming that he had “a reasonable suspicion” that Rama, Vucic and Thaci, led by the European Union High Representatives Federica Mogherini, discussed the division of Kosovo.

Those allegations of Kosovo PM was refuted by his Albanian counterpart, adding that he had never asked Haradinaj to lift the tariffs but had supported them. As for Haradinaj's "reasonable doubt" that he "secretly worked on demarcation", he said that "any wise person knows that this is an outright lie".

"If people would be foolish enough to believe that a process involving not only two states, but other countries as well, parliaments, political parties, societies, and ultimately referendum vote, could be secretly carried out by several individuals, then this world has come to an end", Rama said, Koha reported.

"A wise person knows that this is an outright lie", Albanian Prime Minister concluded.

“We are not a part of any conspiracy. We mediate in order to create an atmosphere and room for the two sides to sit at the table", Mogherini said.

Mogherini also rebuffed Haradinaj’s statement that the German Chancellor had taken over a leading role in mediating the dialogue, and added the EU remains main facilitator in Belgrade-Pristina dialogue.