PM "absolutely does not expect" Kosovo deal by October

"I absolutely do not expect Belgrade and Pristina to reach agreement by October, and I have no reason to believe that this can happen."

PM "absolutely does not expect" Kosovo deal by October

"I absolutely do not expect Belgrade and Pristina to reach agreement by October, and I have no reason to believe that this can happen." 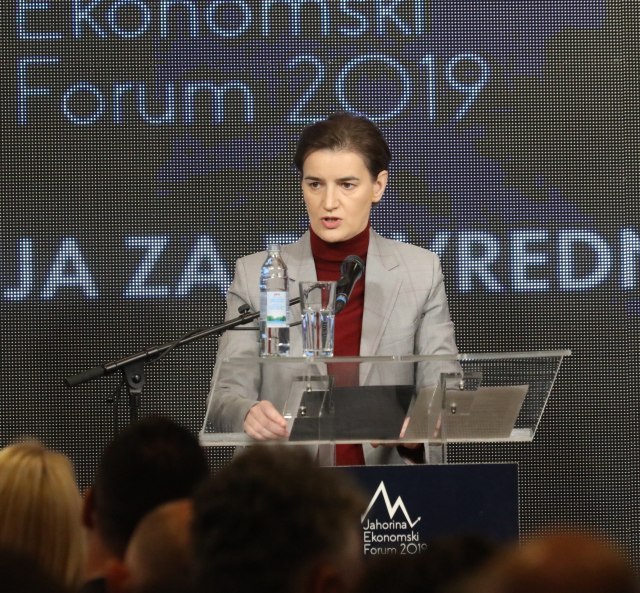 This was her comment on media reports that Belgrade and Pristina are expected to sign an agreement by October.

Brnabic, who is taking part in the Jahorina Forum, said that she had no reason to believe this could happen, "because we are ever farther away from the dialogue, and consequently from a final solution, as well as from an agreement on normalization of relations."

Responding to a journalist's question, Brnabic said that "delineation" was never on the agenda, nor have there been any more specific proposals in connection with that - instead it was mentioned "only as one option."

"Some domestic politicians defined their position as to whether or not they would be in favor of such a solution, but such a proposal was never on the table, as no concrete proposal has ever been," Brnabic explained.

She recalled that the dialogue was interrupted when Pristina began to make unilateral moves aimed against the talks and at making Belgrade end the dialogue.

The prime minister stressed that Pristina had not fulfilled the only obligation it had from the Brussels agreement reached six years ago, and that the EU that was the guarantor of the deal also did nothing to make Pristina fulfill its obligation.

Brnabic pointed out that the situation today would be different if Pristina implemented the Brussels agreement like Belgrade has done, and if the Community of Serb Municipalities existed today.

On top of that, she said, Pristina introduced its 100-percent tax on goods from central Serbia and Bosnia-Herzegovina, transformed the security forces into the so-called Kosovo army, and adopted a platform against dialogue.

"Our red line is the tax. Pristina has to withdraw that decision so that the dialogue can continue, and Serbian President Aleksandar Vucic has been clear on this," said Brnabic.

Asked if she was under any pressure, the prime minister said she was not -"because our partners now understand that Serbia is not a country that can be pressured, and that any pressure and ultimatums can only be counterproductive."

Serbia, she said, is ready to talk about as a partner, and stressed that that our country is a reliable one.