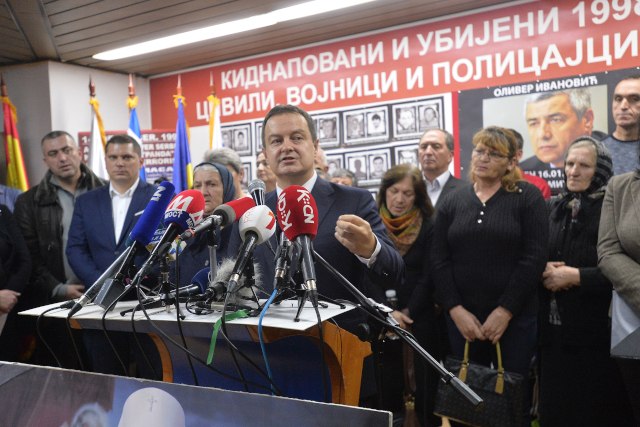 Speaking at a gathering organized by the Association of Families of those Kidnapped and Killed in Kosovo and Metohija, Dacic said that the imposition of tariffs also diverted attention from the issues of the rights of Serbs, property of Serbia in the southern Serbian province, the formation of the Community of Serb Municipalities (ZSO) and many others.

The First Deputy Prime Minister pointed out that the unilaterally proclaimed independence of Kosovo, which is being celebrated in Pristina today, is made up of lies and crimes.

Yesterday you could hear Hashim Thaci say that independent Kosovo was recognized by 116 countries, and that they imposed tariffs because 13 countries withdrew recognition. But 74 United Nations members voted for Kosovo to enter Interpol. Then how did they get the number of 116?, Dacic asked.

The First Deputy Prime Minister recalled that allegations were coming from Pristina that Serbs captured Albanians at a stadium, but that no journalist who tried to record it saw it, and that Serbs took blood from Albanian children for their soldiers and other lies.

Dacic pointed out that what it true is that 200,000 Serbs were expelled from Kosovo and Metohija.

He asked what is it that Pristina is celebrating when, in 11 years since its unilateral declaration of independence, it has not become a member of the Council of Europe, UN, UNESCO, Interpol, and other international organizations, while at the same time recalling that the EU signed a treaty with Kosovo as a territory, not as a state.

According to Dacic, Serbia does not want to aggravate its conflict with Pristina, but to discuss and reach a compromise solution.

The minister said that in the past twenty years, Serbia repaid more than EUR 700 million in loans for Trepca, which Kosovo companies were taking.

We repay this because we maintain that Kosovo is part of the Serbian territory, and they do not say “do not pay for us, we are an independent state”. When it is to pay, then they are part of Serbia, Dacic underlined.

In addition to all that, current leaders in Pristina are people for whom arrest warrants have been issued for the crimes they had committed in Kosovo and Metohija.