About 700 people managed to gather in parts of Melbourne, while 2.000 police officers ensured that they did not enter the city center. 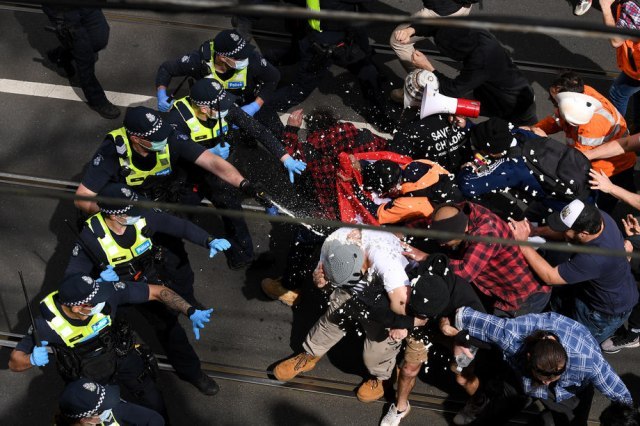 Australian police arrested 235 people in Melbourne and 32 in Sydney on Saturday, at illegal rallies against quarantine and "measures" imposed due to the coronavirus pandemic, while several police officers were injured in clashes with protesters.

The police said protesters had thrown rocks and bottles at them during the protest, and that some police officers were injured as the protesters attacked them.

"What we saw today is a group of demonstrators who gathered not to protest against freedom, but only to clash with the police," Galiot said. Several of them were knocked to the ground and trampled on, the police said, which was confirmed by television recordings. About 700 people managed to gather in parts of Melbourne, while 2.000 police officers ensured that they did not enter the city center, setting up checkpoints and barricades.

Public transport to the city has been suspended.

Australia has been battling an epidemic of the delta virus in Sydney, Melbourne and the capital Canberra since mid-June, which has been under strict quarantine for weeks. 1.882 new cases of coronavirus were reported on Saturday, most in Sydney.

Most restrictive measures will remain in place in Victoria, New South Wales and Canberra until at least 70% of people over the age of 16 are fully vaccinated, which at the current vaccination rate could be expected in late October or early November.

So far, just under 85.000 cases of infection and 1.145 deaths have been reported in Australia since the outbreak of the pandemic.

Most Australians support vaccination and public health measures, but so far there have been occasional and sometimes violent protests against the way the pandemic is being managed.

A very dark day in Australian history. I can’t believe it has got to this point. #Melbourne #Australia pic.twitter.com/rMhRt2ZNtL