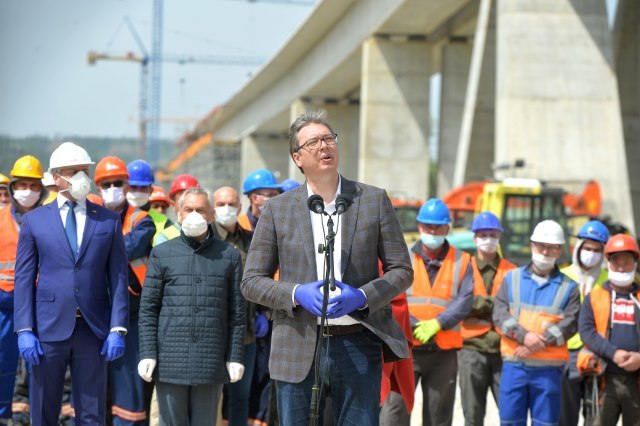 He said that with certainty in October next year we will be able to travel from Belgrade to Novi Sad in half an hour (25 minutes fast train).

"It is better than traveling by car. New Belgrade-Novi Sad would be little over 20 minutes away, as if you were out for coffee", he said.

In a year and five months, he said, we would go 200 km per hour across the viaduct.

"This part of Stara Pazova - Novi Sad alone, we will pay $ 580 million, a total of 850 million for Belgrade - Novi Sad and another 1.2 billion for Novi Sad - Subotica," Vucic said.

Vucic said that there would be no delays in that section, that it was one of the topics he had discussed with Hungarian President Viktor Orbán.

"We have a great cooperation with Hungary, our friends are sincere in every situation," he said.

He stated that there were eight infected workers at the construction site, one left the Fair and seven are still there.

The President of the Republic of Serbia, Aleksandar Vucic, visited the construction of the Belgrade-Budapest expressway.

In other news, the Government of Serbia yesterday called on employers in the field of construction (civil engineering) to continue working at full capacity starting today, April 21, as part of new measures.