According to the latest Covid19.rs data, there are 160 people infected in Serbia, while by April 1, 4.371 people were tested in Serbia. 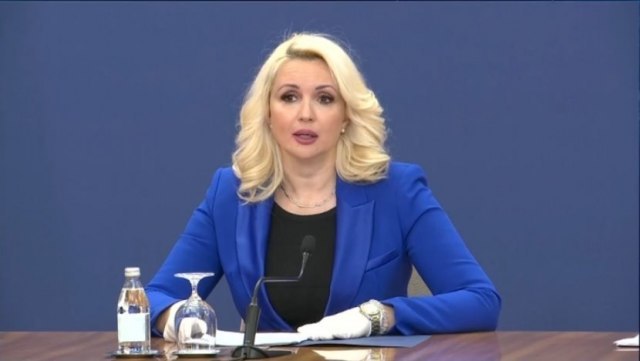 She said 640 patients were hospitalized and there were 72 patients on the respirator.

"We have 5 more deaths, the total number of deaths is 28," she said, adding that all who died in the last 24 hours are men with an average age of 61.2 years.

She stated that 21 men and seven women have died from the disease so far, and that the total mortality to date is 2.64 percent.

Kisic Tepavcevic announced that more intensive testing would be carried out in the next few days in order to prevent further spread of the disease as soon as possible.

"The numbers relentlessly show us where we are and how much we have allowed this disease to spread. We will have more meetings tomorrow and see if it is possible to further prevent the spread of the disease," she concluded.

She responded to a journalist's question, explaining that Crisis Staff did send a text message to citizens to reach those who do not follow the news.

"The goal was to get people who have not been informed and understood the gravity of the situation, to get it seriously this way," she said.

According to her, it is certain that there will be no city in Serbia that will be spared, in case there is so much circulation and communication in the cities.

Kisic Tepavcevic said that the transmission of coronavirus from doctors to patients was not recorded, and that this was an important thing.

"It is a group of people who are constantly screened for the presence of the virus. That person is immediately recognized and adequately isolated, so as not to spread the infection further", Tepavcevic Kisic said, adding that there are coronavirus infected health workers in Cuprija.

She confirmed that the coronavirus-positive pregnant woman deserved to have her privacy and did not say whether the baby she gave birth to was infected.

"I understand that the job of a journalist is that you want to have some exclusivity, but this is not a situation where exclusivity is something that is primary. It is primary that we have valid, timely and accurate information", Tepavcevic Kisic concluded.

Epidemiologist Predrag Kon said that there are situations when personal freedoms can be taken away for the sake of general gain and protection of the general health of the population.

"I cited the example of Obrenovac when it was forbidden to return to the place after the floods, i.e. movement restrictions. In this situation, restricting movement in terms of isolation, self-isolation is something that is even regulated by law," he added.

Kon said it took time to coordinate the work of medical services and that Health Centers need to get involved in human testing.

"When people return to the country, their body temperature is checked, and those who have fever are given a swab and have to wait for the result. Others are still sent to self-isolation", Kon said.

He added that Serbia is coming out of the fourth week of the epidemic tomorrow, and that this shows that we have failed to stop the curve well.

He reiterated that it depends on the virologist whether or not a person will be tested, and that close to 30 healthcare providers have symptoms of a coronavirus infection.

At the People's Front Gynecological Obstetrics Clinic in Belgrade, seven health workers were infected with the virus and about 30 had some symptoms, Kon said.
Kon said he was a moderate optimist, but it was not good that the number of newly infected had jumped to 160.

Acting Director of the Clinic "Dr. Laza Lazarevic", Dr Ivana Stasevic Karlicic said that personal comfort cannot be compared to public health, and that the measures taken by the state are in accordance with the standards of epidemiologists.

"The message to citizens is to be responsible and show solidarity. To protect ourselves and those closest to us, as well as those who are on the front line, such as healthcare professionals," she said.

She noted that the first and best response to citizens' fears is them being well informed, so that the SMS sent by the Crisis Staff last night could not cause fear. "We all know what's happening in the countries where there is a high level of transmission of the virus. It's a situation we've been facing for a month now, and it's nothing new that would be a risk factor for sudden fear and panic," she said.

Talking about the announcement of the 24 hour curfew, Karasevic Stasevic said the measure should not scare the citizens, as it aims to protect public health.
"Even if this measure is adopted, it should not be the cause for fear," she concluded.

She said the Dr Laza Lazarevic Clinic had 2.100 calls since March 17 from citizens concerned and seeking psychiatric help over the situation.
"These are individual cases, there are those that deal with stress badly," she explained.

"The measures were not adopted ad hoc, they are the results of a recommendation by the profession," she added.

The guest of the program "Review" on TV B92 will be Dragan Stevanovic, State Secretary of the Ministry of Economy.

In the show "Focus", Professor Dragan Djuricin will be hosted.