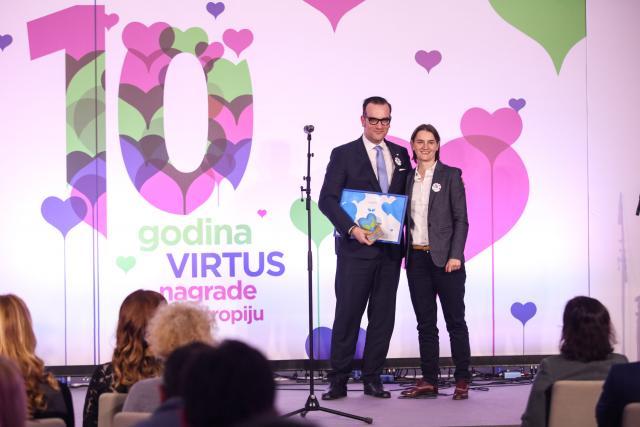 The award, given by the Trag Foundation, was awarded an organ donation and transplantation campaign in Serbia dubbed, "The most important call of life."

In cooperation with the Ministry of Health, Hemofarm and the Hemofarm Foundation have in 2016, according to the jury, raised public attention to the problems faced by people on a waiting list for new organs and influenced the creation of a positive attitude towards the adoption of a new law on transplantation.

In cooperation with the highest institutions of society, the state and the city of Belgrade, the campaign contributed to changing perceptions about donating organs in Serbia and brought the first success - June 6 has been declared National Day of Donors.

In the long term, the goal of the campaign is to create a better and healthier society that would lead to a larger number of donors in Serbia and give the people on waiting lists a new chance for life.

"Donation and transplantation of organs in any society should be the topic of the highest public interest. With only three donors per million inhabitants Serbia is at the very bottom of the list of European donors and our campaign is focused on donations no longer being an incident, but a phenomenon such as is the case in some European countries and in the region," said Hemofarm General Director and STADA Group VP for Southeastern Europe Ronald Seeliger, and added:

"Donating is a huge hope for the whole of society and for its future. Therefore, if you already have not, I urge you to become a donor, and invite you to together with us contribute to 'The most important call of life' achieving its full meaning."

An eponymous documentary has been produced as part of the campaign, showing powerful testimonies of people who are waiting for transplants, with the goal of in addition to amendments to the law, change public awareness in Serbia and have organ donation accepted as a voluntary act and an expression of solidarity.