Protest in Skopje against name deal; president won't sign it

A protest has been held in Skopje against an announced agreement with Greece to change the country's name to "the Republic of North Macedonia." 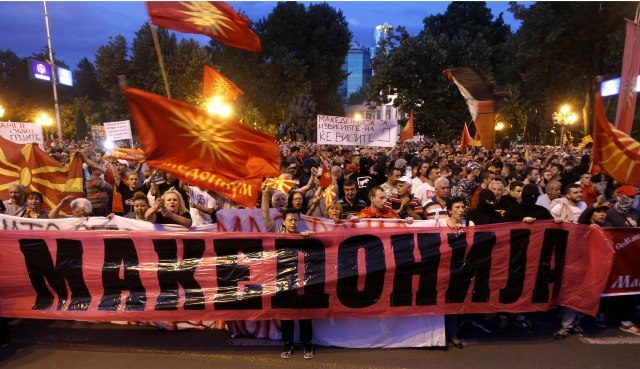 The citizens who gathered in front of the Macedonian Assembly blocked a boulevard and several nearby streets, while the police was deployed to guard the building, MIA agency reported.

Plusinfo website said that a Molotov cocktail that did not cause a fire was thrown at the police, as well as several bottles, while a stun grenade was also activated.

Demonstrators threw other object in the direction of the police, burned flares, chanted "Macedonia, Macedonia," and shouted insults aimed against Zoran Zaev's government. One participant in the protest fell ill, and was taken away in an ambulance.

The head of the All-Macedonian National Council - Makedonijum, Straso Olumcev, said they had gathered spontaneously to express revolt over what happened on Tuesday, MIA said.

He stressed that "only the Macedonian people and nobody else has the right to decide on national issues."

Macedonian President Gjorge Ivanov said in a televised address earlier in the day the name agreement reached with Greece was detrimental to his country, and that he would not sign it.

Ivanov said the deal is "detrimental and unique in the history of mankind, violating the Constitution and the laws, undignified and reached in a non-transparent way."

The Macedonian government then reacted to this to say that Ivanov "failed to rise above his weakness and see the perspectives opening for the country following the agreement between Macedonia and Greece," and that "citizens, rather than the president, decide on the future of Macedonia."