"It takes two to make a deal"

President of Serbia, Aleksandar Vučić, said that he believed that Serbia would have the serious support of France on its European path. 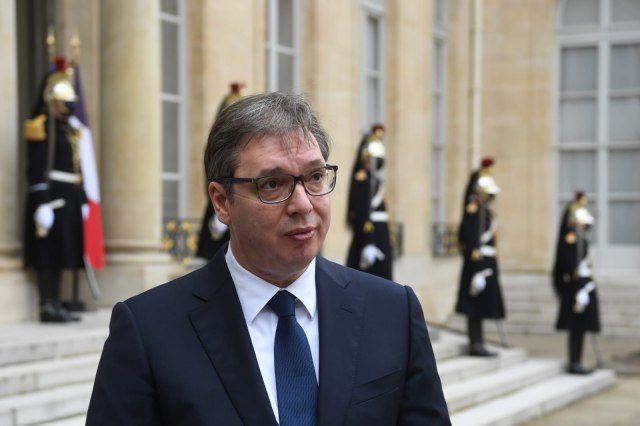 The meeting between Vučić and the President of France, Emmanuel Macron, lasted for four hours.

"During the coronavirus pandemic, people avoid meetings, so there are no such meetings. This is proof of true friendship and true commitment of French President Emmanuel Marcon. I am happy that my relationship with him is at a very good level. He fully understands Serbia's position," he said.

Vučić said that a great honor was shown to him in Paris, that he visited the wine cellar of the Élysée Palace, the official residence of the President of the French Republic, and that he had two tête-à-tête meetings with Macron.

"We mostly talked about the relations between Belgrade and Pristina, it is a difficult and neuralgic issue for the whole of Europe, not only for Serbia. I presented Serbia's position. I believe we will have serious support from France on our European path. France will support Serbia, I also believe, in finding innovative compromise solutions to the issue of Kosovo and Metohija", he said.

As he said, the chapters will be opened by clusters, and that this was discussed with the Minister for European Integration Jadranka Joksimović. "I expect that we will open more chapters this year, according to the new methodology, through clusters," said Vucic.

Vučić pointed out that the most important thing is for Serbia to rely on its own strength, and not on someone's help.

Asked whether the current inactivity of the EU in the enlargement process means that we are left to ourselves, Vučić said that he always believes in us and our strength, that it is no longer like when we failed in 2000, disappeared, as he said, from the face of the earth.

"Everything depends on us. We should not teach the people that the most important thing for us is getting someone's assistance, but our strength, the strength of our economy and politics to follow the European path, and work on finding compromise solutions," he stressed.

He announced that Macron would visit Serbia in September or October.

"It will be a significant visit, we will have a lot of contracts to sign," he said.

Regarding Kosovo and Metohija, he stated that it is necessary for the other side to understand that "dialogue is not a well of desires".

"I don't see anything that could bring us closer to a serious dialogue. We are always ready for talks, but every agreement requires two sides, anyway, for the moment, I don't see another side", he said.

He stated that Belgrade is not at all happy about the establishment of diplomatic relations between Israel and Kosovo, and that this will not positively affect Serbia's relations with the Jewish state.

"It was expected for six months, so in Washington (on September 4) we did not want to sign the document together with the Albanians and the Americans. We did not want to encourage that, but to encourage Israel not to do that, but Israel chose that America is the most important. It will not have a great impact on our relations, but it opens up some other perspectives that I would not like to talk about now," Vucic told Pink TV.

After the meeting with the President of France, Emmanuel Makoron, Vučić said that after the establishment of diplomatic relations between Israel and Kosovo, no Muslim country will want to recognize Kosovo's independence.

Vučić stated that Serbia will now wait to see whether Priština will respect its part of the Washington agreement and whether it will allow the construction of a railway from Priština to Merdare.

"The whole trick is that they want to build a railway across Kosovska Mitrovica, Leposavic and Zvecan linking them with Kraljevo and Raska in order to take the Serbian railways in the north of Kosovo. We were looking for a road and a railway from Pristina to Merdare, they are not interested in that particular route, because there is no Serbian railway there that they could take", Vucic said.

"We were looking for the road and the Pristina-Merdare railway, but they are not interested because there is no Serbian railway that they can take. The other issue is Lake Gazivode", he said.

"I saw that (U.S. State Department official Matthew) Palmer insisted on ending the agreement between Israel and Kosovo, and I know that he was against the Washington agreement. Now we will see if they want to share the energy resources of Lake Gazivode", Vucic said.