President of Serbia and the leader of the SNS, Aleksandar Vucic addressed the party's election headquarters for the first time tonight. 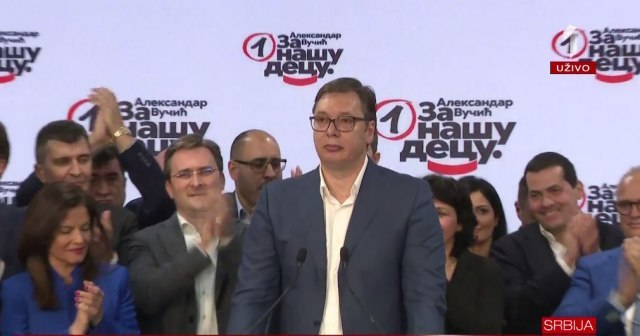 "I have been in politics for a long time, but I have never experienced a moment like this. Tonight I gained great trust from the people in conditions when few believed. We received a great warning from the people that we must be even more responsible, careful and diligent."

"We received more than two million votes out of a little less than 3.3 million, which is absolutely unprecedented," Vucic said, and those present applauded, shouting "Serbia".

Vucic stated that the SNS won 63.4 percent, and that 64 percent is expected with votes from abroad and Kosovo and Metohija.

Before the arrival of Vucic, the celebration started at the SNS headquarters.

"We failed in Moscow, but that's why 95 percent of the votes for the SNS were in Sochi. The only thing we can't tell you, and what some other people will do tomorrow, is waiting for the OSCE to count the votes in Kosovo and Metohija, and there also, we had a record turnout."

He said that they lied to our people that there would not be a large turnout in Kosovo and Metohija in the elections.

"I am grateful to the people for their responsibility and for understanding that the future of Serbia is important to each of us and we will protect our health. I want to thank our pensioners and all other people who, despite all possible threats and fabrications, had enough courage to tell them what they think about the future of Serbia. They thought through the campaign that I was not telling the truth. You know, we had daily research. They showed that the more they were in public, the more they fell.

As he said, the SNS talked more about plans and ideas, and the people recognized that.

Vucic thanked for the most fair and clean campaign so far.

You get this trust of the people in important moments, for great work and results, Vucic pointed out.

"This does not mean that the people are satisfied with us, but that they understand what responsibility it means in the future and that we need to change. We will be even better than before."

He said he would not talk about opponents.

He also announced taking people from lists that did not pass the census.