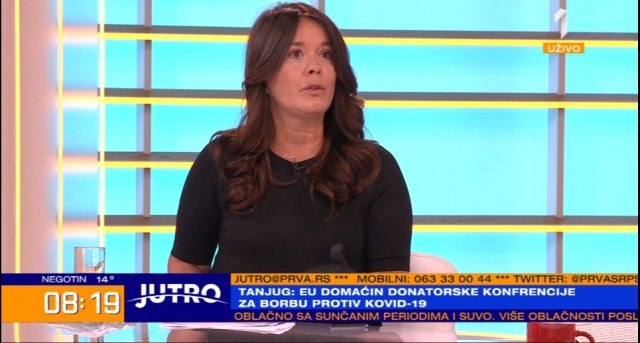 In the aforementioned footage, Dragan Djilas says disconcertedly that his children were shaking with fear and got scared because Vucic's supporters yelled insults to him 30 meters from where his small children lived.

"President Vucic has pledged not to mention his political opponents since the start of the state of emergency. He has not mentioned them for 50 days or so. And all these days, he and members of his family have been insulted by the gentleman in question, his coalition partners and media close to Mr. Djilas", Vasiljevic told Television Prva.

She said that Djilas "was nowhere to be found, did not cry and beg these to stop."

"His children was not mentioned, none of the media in Serbia put Djilas's children on the front page. And you will remember President Vucic's children very often ended up on the cover pages, and not only on the front pages of some media, but also on twitter accounts," Vasiljevic said.

However, Vasiljevic said that Djilas had been lately calling Vucic a lunatic and psychopath, while his supporters directly threatened the President and his family, while "Djilas never asked himself how Vucic's children felt about it".

Vasiljevic said that, as far as she heard, those who offended Djilas hadn't placed loudspeakers "under his windows, but on the rooftop of a nearby building".

"Why would his children be more protected than President Vucic's? No one messed with the kids, none of us - not the president, no one close to the president, none of the media in Serbia that we could in any way influence, put the children of any political opponent on the front page, while Djilas did", Vasiljevic said.

She asked all media in Serbia not to involve children because they were not to blame for what their parents did.

"We don't divide media into pro-regime or tycoon"

Vasiljevic said today that President Aleksandar Vucic, his cabinet and his press service "have never divided the media into pro-regime or tycoon, anti and pro-government."

"Our press conferences are attended by reporters of all newsrooms who want to attend. Who doesn't want to come, I can't make them come. Who wants to come, gets a chance to ask questions. The president is hosted in the programs that are not pro-government, that are not very fond of the government", Vasiljevic said on TV Prva.

As she said, the President of Serbia and his services, behave in the same way in co-operation with all media, whether they are against the government or for the government, and do not make that distinction.

Vasiljevic said that the media situation in Serbia is "not fabulous", but that it is neither anywhere in the world.

According to her, some media outlets have been campaigning against doctors, coming to press conferences only to ask political questions.

Speaking about several ambassadors issuing statements on World Press Freedom Day, Vasiljevic said that "what they resent is so finely-tuned, it is called tabloidization."

"Tabloids did not originate in Serbia, but Serbia imported it. Tabloids existed long before Serbia in the United States, in Germany," Vasiljevic concluded.