"Vladimir Vladimirovich told me: Aleksandar, don't do it"

Serbia is a reliable partner to Russia, President Aleksandar Vucic had told TASS. "I think that, I act that way, I don't lie," Vucic said. 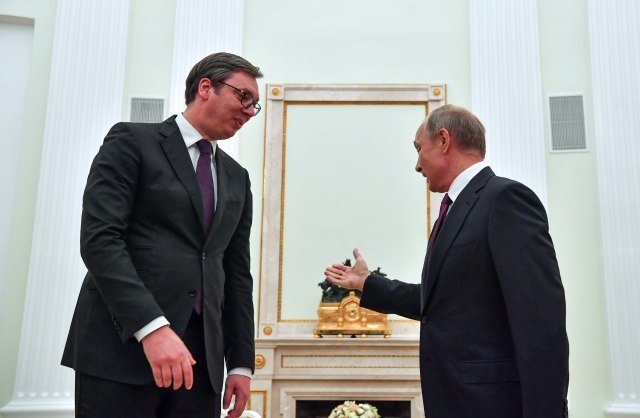 "Maybe somebody does not like my words, but I think we are a reliable partner to Russia. When I say 'yes' to President Putin, then we do it," said Vucic. "And when I say in Washington and Brussels that we will not and do not want to impose sanctions on Russia - that's the truth, and it's fair," the Serbian president said.

Vucic pointed out that the Russian president is very popular in Serbia and that a large number of people, who have wanted to see him for years, will gather when he visits Serbia on Thursday, "just to see him."

One of the reasons for Putin's popularity in Serbia is that Moscow saved Serbia from the stigma of genocide, Vucic said in an interview with the first deputy general director of the TASS agency, Mikhail Gusman, ahead of President Putin's visit to Belgrade tomorrow.

As Vucic emphasized, we will never forget 2015 when Russian Foreign Minister Sergei Lavrov and Russian Ambassador to UN Vitaly Churkin, on Putin's order, saved Serbia from the stigma of a people who committed genocide - something suggested in a draft British resolution that Russia blocked at the UN Security Council. "We will never forget that," said the president of Serbia.

"I always consult with President Putin, I ask him for advice, and I request his advice. I familiarize him with what is happening and I don't lie, I tell the truth, although he does not always like everything. I think this is one of things which Putin respects very much. And I respect this because he is the leader of a great country and I'm the leader of a small country, and he shows respect for this country, and I'm very grateful for that," Vucic said.

Vucic recalled during the interview that he came under serious pressure after Serbia had sent humanitarian aid to Syria. "We sent not weapons, but grains, butter and sugar, but harsh attacks on us began. And when I came to President Putin and journalists came I told him that we could send one or two planes with (humanitarian) aid. And Vladimir Vladimirovich told me: 'Aleksandar, don't do it, this only creates additional problems for you'."