"Serbia can move even faster on its path to EU"

Prime Minister Ana Brnabic reiterated on Tuesday in Brussels that the main foreign policy priority of Serbia is joining the EU. 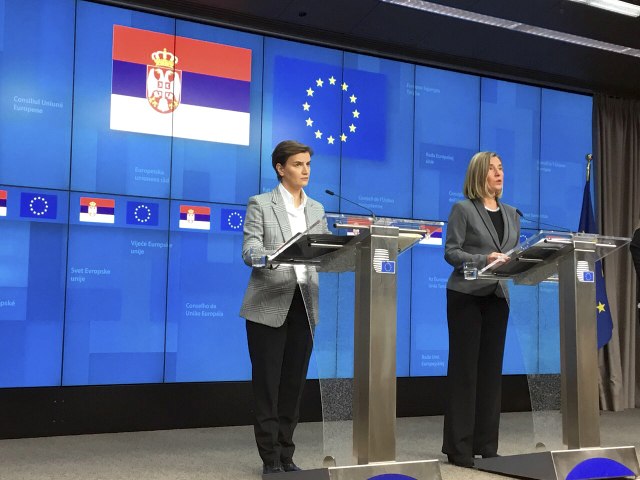 Brnabic said that "we can be even more efficient in the reforms that we conduct, primarily because of our citizens," the government announced.

At a joint press conference with EU High Representative for Foreign Affairs and Security Federica Mogherini, Brnabic recalled that 16 negotiating chapters are currently open, after the meeting of the Stabilization and Association Council between Serbia and the EU, while two are temporarily closed.

She said that our country is not frustrated by the number of open chapters, nor the pace of this process.

At the same time, the prime minister stated that Serbia, in its relations with Pristina, is trying to be tolerant, constructive and to find room for dialogue.

She stressed that despite the economic losses that the state suffers from Pristina fees, Serbia did not impose any counter measure, saying that we will remain reasonable and continue to advocate for regional stability and for a different perspective of the region.

As she underlined, Serbia remains constructive and tolerant in order to continue the dialogue between Belgrade and Pristina and work on regional stability.

"Serbia has applied everything from the Brussels agreement. There are 15 points that are applied or not. The basis is the establishment of the Community of Serb Municipalities. Not even five years after the agreement we do not have the statutes of the Community of Serb Municipalities. Pristina did absolutely nothing to implement an agreement that was difficult to negotiate and sign. Is this normalization?" Brnabic asked.

Mogherini said she is optimistic about the European future of Serbia and that Serbia, along with cooperation with Brussels, could move even faster on that path of implementing reforms.

She reminded that the accession process is based on Serbia's implementation of the necessary reforms.

Also, the EU high representative welcomed the personal commitment and engagement of the Prime Minister in that regard, expressing the belief that this would contribute to further progress in key areas – the rule of law, the judiciary and freedom of speech.

According to Brnabic, Serbia's commitment to normalizing relations with Kosovo is one of the key elements of progress in accession negotiations.

Mogherini also referred to additional taxes imposed by Pristina on goods from Serbia and Bosnia-Herzegovina, saying that the European Commission's position was clear from the beginning – that these measures violate CEFTA and the SAA, and that Pristina should withdraw these measures.

Serbia is an important EU partner in the military and civilian missions in Mali, the Central African Republic and Somalia, she said, and at the same time expressed the expectation that Serbia will adapt its foreign policy to EU policy.

"I am optimistic about the European future of Serbia and I believe that by working together Serbia can move even faster," concluded Mogherini.