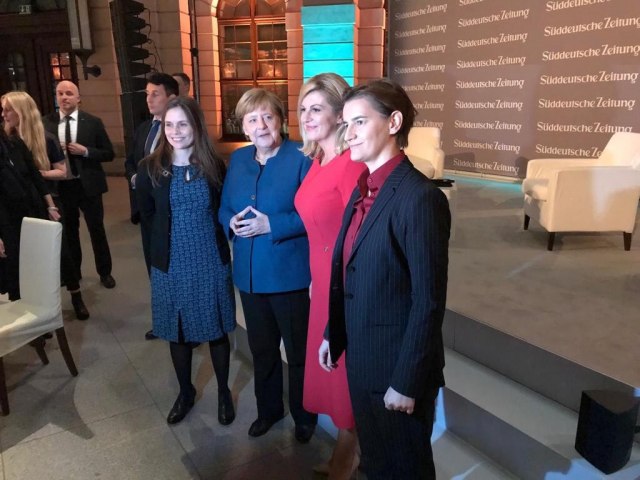 Merkel and Brnabic "sat at the same table in the ceremonial hall of the German Historical Museum," the agency said.

The prime minister said that the dinner was "an opportunity to talk to the German chancellor on various issues," the Serbian government announced.

According to this, Brnabic would also "thank Merkel for all the support that Germany provides to Serbia, but also to talk to her about the issue of Kosovo snf Metohija."

Brnabic's encounter with Merkel comes only days after Serbian President Aleksandar Vucic met the German chancellor on November 11 in Paris, where the two officials were attending ceremonies to commemorate Armistice Day.

Vucic and Merkel "discussed bilateral relations, economic cooperation, the situation in the region and Serbia's accession to the European Union (EU)," Vucic's office said in a press release, reported by Beta agency on Tuesday.

Vucic "briefed the chancellor on the status of the talks between Serbia and Kosovo, and Pristina's latest decision to increase taxes on imports from Serbia and Bosnia, underlining that it was difficult for him to understand irresponsible acts of breaking an agreement, undermining regional cooperation and stability."

The chancellor "welcomed Serbia's economic successes, stressing that she wished to help protect peace and stability in the Western Balkans," the presidential office said.

The meeting between the president and the chancellor was suggested by Merkel, during the European People's Party's conference last week, in Helsinki, Finland.