Now is the moment to exit the frozen conflict on the issue of Kosovo and take a path that would be taken by nations that solve problems and thus become victors. 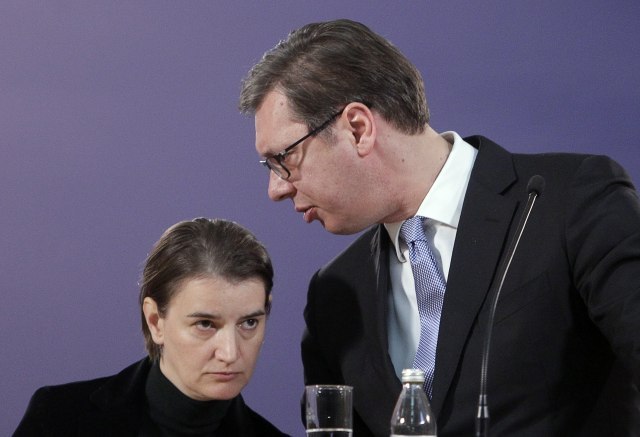 This is what Prime Minister Ana Brnabic has said, in a statement to Tanjug.

At the same time, she urged all actors of political and public life to take a responsible attitude towards this issue, and citizens "to to stand with the president of the Republic, in an effort to find a solution for Kosovo and Metohija and for the future of the country."

"Finding a solution for a long-term normalization of Belgrade-Pristina relations is undoubtedly the most important political issue for the future of our country and our people," the prime minister said.

"By opening of the internal dialogue and the difficult but never more constructive conversations with the most important world leaders, Aleksandar Vucic has shown audacity, courage, the greatest possible level of political responsibility, and leadership to try to solve the difficult and emotional issue that has been burdening our society," said Brnabic.

She recalled that Kosovo and Metohija is "not a single-use issue, and especially not one to be politically abused."

"However, for some time now, it has been turned into the subject of daily political debates that not only do not contribute to democratic political dialogue, but further degrade it, and on an issue around which we need to establish a national consensus," the prime minister said.

If the period behind us has been marked by nonconstructive discussions, we still have time, she stressed, to show full responsibility and political maturity.

"I appeal to all participants in political and public life to act as responsible individuals, aware that the solution to this issue will mark the future of generations," Brnabic said.

"At a time when the stance great powers towards Serbia is changing and when our voice is being heard much more than a few years ago, it is time to show the greatest unity on this topic," she continued, adding that "the whole society should move towards a solution, pull its head out of the past and turn around the future we are now creating."

"This means that citizens are not offered solutions that sound nice, and which, unfortunately, do not have any foundation in the reality and the political moment in which we are," noted the prime minister, stressing:

"Will we promote the ideas that have been made irrelevant by unilateral declaration of Kosovo's independence, which the most powerful countries of the world consider an already closed issue, or will show maturity and seek compromise within that's possible, in the most direct way affect how our future, and how young generations will grow: on myths from the past or creating a future that fits every citizen."

"I want to once call on all citizens to stand with their president, to look together to the future, primarily for the sake of generations that will come, but also because of the current generations, which can end a series of bad and losing decisions that have been made in not so distant past."

"Now is the moment to exit the frozen conflict and stake a path that would be taken by nations that solve problems and thus become victors," Brnabic concluded.