"Building new relations with US based on past cooperation"

Foreign Minister Ivica Dacic says he is convinced the new US administration "has more understanding for the positions of Serbia." 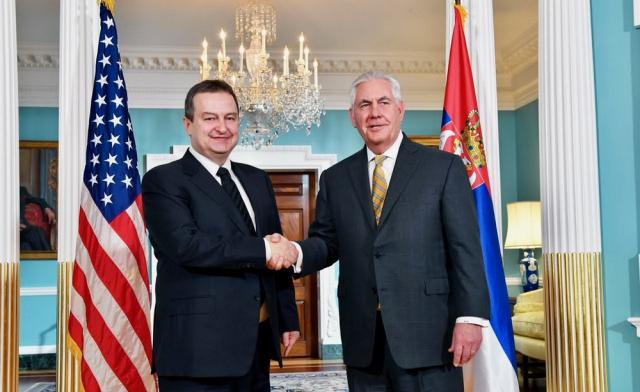 This is according to Dacic's remarks, published by the government on Saturday, made after his meeting in Washington with US Secretary of State Rex Tillerson.

Dacic "stressed that the meeting in Washington was very good and that the discussion was dedicated to the future and bilateral relations between Serbia and the United States."

He mentioned that prior to the conversation with Tillerson, he wrote in the guest book that this meeting is dedicated to the centenary of the US and Serbian alliance in the First World War.

"For us the very important date this year will be July 28 because on that day 100 years since the Serbian Day in the USA will be marked. That is the day when Woodrow Wilson ordered the Serbian flag to stand out at the White House in recognition of all victims that Serbia gave in the First World War," Dacic said.

Since then 100 years have passed, and that is why we want to reset our relations, to seek common interests, to look for ways in which the United States can help achieve our key goal - stability, peace in the region and solving open issues. First of all, I am referring to the attempt to resolve the problems of Kosovo and Metohija permanently, Dacic stated.

He "expressed his conviction that his interlocutors carefully listened to all the arguments he put forward, saying that this meeting confirms that the new US administration has more understanding of what Serbia is talking about in relation to previous administrations, especially those that were drawn into the war conflict in the territory of the former Yugoslavia."

Recalling that Mitchell was "a new man in the US administration who replaced Victoria Nuland," Dacic said he did not come "from that classical format of the State Department" and represented instead "a man of the new US administration."

"With all this in mind, we are trying to approach in the most serious way the important bearers of the US official state policy - President Trump, Vice President Pence, Tillerson - in order to see if there is understanding for Serbia's arguments," Dacic said.

Recalling that it will be one hundred years on July 28 since the Serbian flag was raised over the White House - which US President Woodrow Wilson did to honor the struggle and suffering of the Serb nation in the First World War - "and he was also a great friend of (Serb scientist) Mihajlo Pupin" - Dacic said that "afterwards, at this moment," relations between the two countries came to "a phase of total incompatibility."

"I would not even say 'incompatibility', but of big conflict, we even had the (NATO) bombing," said Dacic.

The minister added that he thought some changes were now taking place, "at least in the sense that there is willingness to listen to our arguments and our suggestions regarding how we think certain things can be solved, and what our common interest is."

And that, he continued, is security, stability, peace in the region.

"This cannot be accomplished without an agreement with the Serb people as the largest nation in the region. In order for this to happen, some, I refer to it as minimum, common interest must be found, it doesn't have to be maximum. And that's why I think that this meeting with Mitchell was very useful," Dacic said.

Asked what "a legally binding agreement with Pristina" - demanded by the EU - means to Belgrade, and whether that would mean "recognizing Kosovo" - Dacic said, "This agreement means that we need to regulate our relations, to not have bilateral disputes with Kosovo."

When the interviewer asked whether this implied "two states," Dacic said, "They (the EU) can think about it any way they like individually, but the EU as an organization can never establish such a position, because there are five (EU-member) countries that did not recognize Kosovo."

"If someone thinks we should now accept what the Albanians have done unilaterally, I do not think that is realistic," the minister said.

Speaking about the investigation into the murder in Kosovo of Serb politician Oliver Ivanovic, Dacic reiterated that Serbia had not received any information from Pristina.