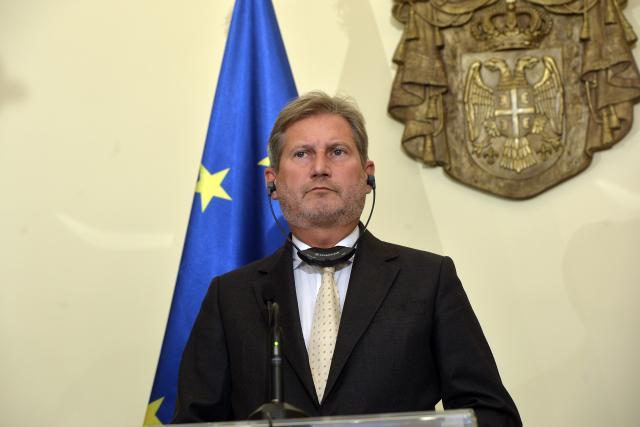 This territory is referred by the Albanian side as "Chameria," and its inhabitants as "Chams."

A spokesperson for the EC was asked about "the dispute" between Albania and Greece - after EU Commissioner Johannes Hahn reportedly said that "the issue concerning the Chams is part of the discussions between officials of Greece and Albania about their mutual relations."

It is believed in Albania that "Chameria" - a part of the border area of Greece's Northern Epirus that has ethnic Albanian inhabitants - should become a part of Greater Albania - a nationalist expansionist project that would also include parts of Albania's other neighbors: Serbia, Montenegro, and Macedonia.

But Athens resolutely rejects the idea that there is a territorial dispute at all, and recognizes "neither the problem of the Albanian minority along the border with Albania, nor the term, 'Chams'."

However, Albanian media believe that Hahn "admitted that the issue of the Chams exists" when he submitted a written reply to a question he received from a Greek member of the European Parliament, who wanted him to speak about Albanians' territorial pretensions toward Greece.

According to Albania's Top Channel and other media there, Hahn said that "a joint mechanism should be created for both countries to organize periodic meetings to discuss suspended matters, including the Cham case along with other conflicts such as the definition of the continental shelf, Greek-Albanian maritime areas and minority rights."

In her reply to a Greek journalists, EC spokesperson Maja Kocijancic said that "the European Commission in this regard particularly welcomed the proposal of Greece to establish a platform for dialogue that would allow consideration of all the issues that require clarification."

The European Commission, she added, "is encouraging the two countries to continue to engage" and thus "remove possible disagreements on important issues."

Asked by reporters about the official position of the European Commission and whether it recognizes that there is a problem with the Greek territory along the border with Albania, Kocijancic reiterated that the Commission "welcomes the intention of Athens and Tirana to clarify outstanding issues through dialogue" - and would not "go beyond that."

The Greek Reporter website said that the Greek Foreign Ministry "accused Hahn of lacking impartiality on the matter and indicating a bias towards Albania in his response to the Greek MEP."

"As is known, there is no Cham issue and, as a result thereof, never has it been accepted as a topic in negotiations between the governments of Greece and Albania. Commissioner Hahn through his untruthful response demonstrates his failure to exercise his duties on the basis of the impartiality principle so that the common interest of the Union may be promoted as provided for in Article 17 of the Treaty of Lisbon. He has already been asked for, and is obligated by virtue of his institutional role to, immediately provide convincing explanations as to the unacceptable and erroneous content of his contentious reply," the Greek MFA said.