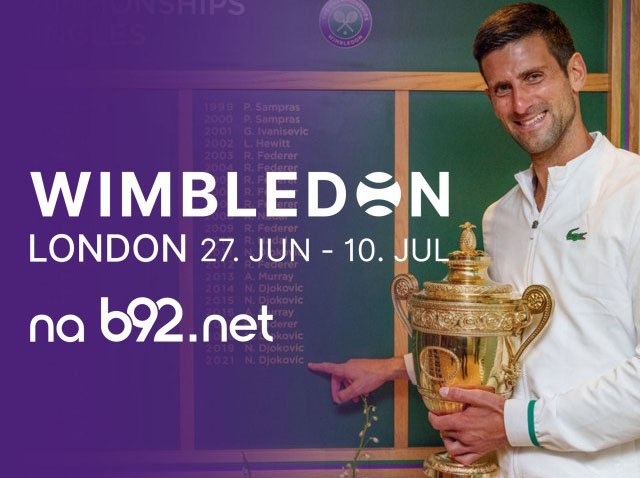 The competition at Wimbledon starts on Monday, and the matches of the first round, among others, will be played by five Serbian tennis players, including the defending champion Novak Djokovic.

Three-time Wimbledon winner Djokovic is playing against Soonwoo Kwon from South Korea in the first round.

The match is the first on the Central court, where the competition starts at 2.30 p.m. Central European Time.

Djokovic has a series of 21 victories at the London Grand Slam, where he is trying to win the seventh title and equalize with the American Pete Sampras.

The record holder is the Swiss Roger Federer, who has eight trophies at Wimbledon.

Serbian tennis player Laslo Djere is playing against Chilean Alejandro Tabilo in the first round, and the match is the second on the program on the court number seven, where the competition starts at noon.

The match of the first round between Dušan Lajović and the Spaniard Pablo Carreno Busta is the third on the program on court number 15, where the competition starts at 12 o'clock.

On the first day of the competition, the home player, two-time Wimbledon champion Andy Murray, will also be on court against the Australian James Duckworth, and the Spaniard Carlos Alcaraz will play against the German Jan-Lennard Struff.

The player from Tunisia, Ons Jabeur, will start the tournament with a duel against the Swede Mirjam Björklund, and the Wimbledon champion from 2018, the German Angelique Kerber, against the French Kristina Mladenović.

This year's Wimbledon is full of controversies. The leaders of the ATP and WTA decided not to award points because the organizers of Wimbledon banned the performance of Russian and Belarusian tennis players due to the war in Ukraine.

The two best placed players on the ATP list, Daniil Medvedev and Alexander Zverev, will not compete in the men's competition. Medvedev was banned from performing in London due to the war in Ukraine, while Zverev is recovering from an ankle injury.

American Serena Williams, who did not play for a year due to injury, will also perform at Wimbledon. She received a special invitation to participate in the third Grand Slam tournament of the season, and the rival of the American in the first round will be the French Harmony Tan.