BELGRADE -- Today, President of the European Commission continued her visit to Belgrade as part of her tour through the Western Balkans region.

BELGRADE -- Today, President of the European Commission continued her visit to Belgrade as part of her tour through the Western Balkans region. 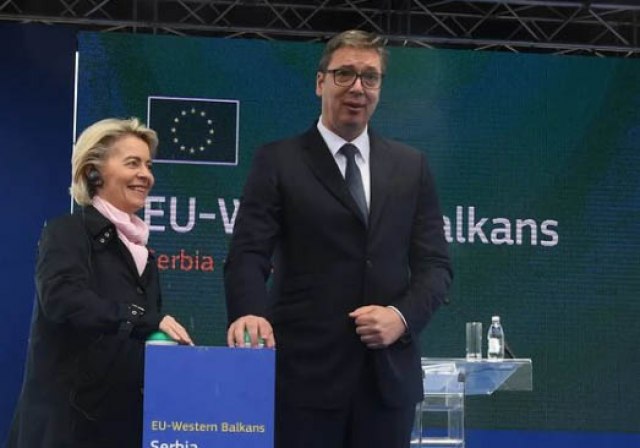 She attended the ceremony marking the launch of works on the modernization and rehabilitation of the Nis-Brestovac railway on the international railway Corridor 1, and referred to the dialogue between Belgrade and Pristina, i.e. on Kosovo and Metohija. The ceremony was also attended by the President of Serbia, Aleksandar Vučić.

"For us, this is a historic visit, a great and important thing. I promise that the delegation in Brussels will make efforts to reach an agreement, preserve peace and sign more agreements that will mean a better economy for all. Serbia will not be a member of the EU until we resolve relations with Pristina, but we will fight and resolve things. I am glad that you will know where Nis is and how important it is for Serbia, and you are always welcome", Vucic said, adding that Serbia remains committed to respecting the agreements signed with the EU within the dialogue with Pristina.

Today, Vučić thanked President von der Leyen for, as he said, reasonable words and her position on the crisis in the north of Kosovo and Metohija. Vučić noticed that there is hardly a family that is destined to be firmly connected to the EU as the von der Leyen family, so the president of the EC, Ursula von der Leyen, a long time associate of Angela Merkel, whose father was one of the first officials in Brussels in 1958, knows best that the fundamental freedoms are embodied in the four great freedoms - the movement of people, goods, services and capital.

"It is unlikely that such a person exists. You, before anyone else, have the right to express an objective position on all political and economic developments in Europe and the world. I am especially pleased with your position on the crisis in northern Kosovo and Metohija and everything for which you have found a balanced approach", Vucic said.

"With gratitude for those words of reason, I want to reiterate that Serbia is fully committed to the implementation of the agreements signed so far, which is sponsored by the EU," President of Serbia said.

Vučić also said that the Belgrade delegation in Brussels is doing its best and making maximum efforts to reach an agreement. He said that Von der Leyen is always welcome in Serbia and thanked her for her kind words and desire to see Serbia in the EU.

"We know what our job is, but having in mind the difficulties due to relations with Pristina, we will do everything we can to advance on the European path," Vucic said.

"It's good that the dialogue resumes"

Von der Leyen said that it is good that the dialogue lasts.

"It is good that talks are taking place in Brussels. The region needs reconciliation, and you are part of that. Dear Alexander, we are extremely looking forward to meeting at next year's summit. Serbia is making an important contribution and its voice should be heard. We are listening to you", said von der Leyen.

"I strongly support Serbia's European integration. I welcome the reforms in Serbia, you have done a great job. We support Serbia's ambitions to open new clusters," she said in her speech. She referred to Serbia's EU accession.

"I think we all agree on the fact that Serbia has already come a long way. The efforts that Serbia is making are not just for the EU, but to improve the lives of everyone in Serbia. Some preconditions must be met. The EU has built values ​​that we respect. We know you are improving and it is an ongoing process. The rule of law and democracy are great values​... We have learned that we are incredibly strong if we work together. I want the Balkans to be integrated and raise single market standards. There are principles about common values that need to be respected. Not only will we be friends and partners, but we will all be in the EU," she said.

Von der Layen arrived in Belgrade last night, and was greeted at the airport by President Aleksandar Vučić, after which the two officials had talks at the "Mir" villa.

This morning, von der Layen, together with President Vučić, will participate in launching the project on the railway Corridor 10. It is also planned that she will attend the signing of the contract for the rehabilitation of the section of the Peace Highway (Niš-Priština) with financial support from the European Union. Von der Layen began her tour of the Western Balkans on Tuesday with a visit to Tirana, then went to Skopje, Pristina and Podgorica. After the meeting with the Prime Minister of Kosovo, Albin Kurtija, she said that Pristina and Belgrade should develop a constructive dialogue and lower tensions in the north of Kosovo.