SARAJEVO -- High Representative in Bosnia-Herzegovina, Christian Schmidt, commented on the claim of Serbian member of Presidency, Milorad Dodik, that he has no legitimacy.

SARAJEVO -- High Representative in Bosnia-Herzegovina, Christian Schmidt, commented on the claim of Serbian member of Presidency, Milorad Dodik, that he has no legitimacy. 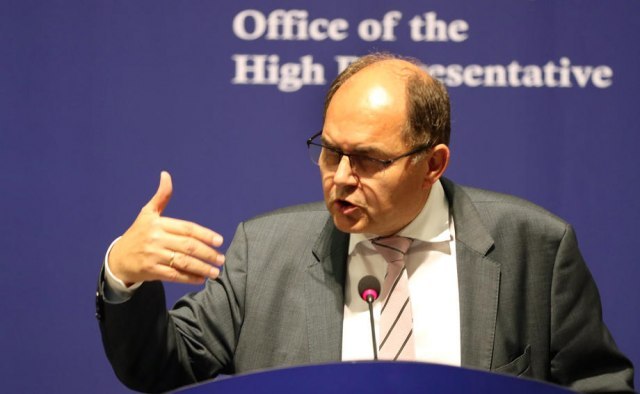 He pointed out that it was "very clear" that he was appointed by the international community.

"I am in the service, I am here, I live here. I call on everyone to take arguments into account, not just their understanding of the world," Schmidt told HTV in Zagreb on Tuesday, where he had previously talked with Croatian Prime Minister Andrej Plenković.

Schmidt, who also talked with Plenković about the process of changes to the Election Law in Bosnia-Herzegovina, assessing that individual or ethnic identity must be harmonized through joint coordination.

"We have experienced that with Europe as a whole. The European Union is nothing but governance in order to reach compromises on different points of view," Schmidt said, Klix.ba reports.

Speaking about the electoral reforms, he stated that ensuring legitimate political representation in the electoral process is a task that must be fulfilled by domestic government representatives at the constitutional and legal level.

"I think it is a task for those responsible in Bosnia and Herzegovina. We on the international side will only help, but in essence they should decide. I would be satisfied if they reached an agreement," Schmidt said. Asked whether Croats in Bosnia-Herzegovina have the same rights as the other two peoples, he said that after a few weeks he realized that the problem lay in the lack of rights of those who do not belong to the constituent peoples at all.

"I think we need to focus on the Dayton Accords. Some things have been fixed. There are three constituent peoples. We have other peoples. Mostly peoples who are not connected to those constituent peoples. I don't think it's easy to connect them all, but it's important to work on that", Schmidt said.

Speaking about the help of the international community, Schmidt stated that one of the successes is the establishment of peace, pointing out that the presence of a foreign factor is still needed in Bosnia-Herzegovina and that Angela Merkel "sent him to Sarajevo to better understand the situation and find a way to improve life of ordinary people".