BELGRADE -- President of Serbia attended the opening of the Borča Health Station within the "Dr Milutin Ivković" Health Center in Palilula.

BELGRADE -- President of Serbia attended the opening of the Borča Health Station within the "Dr Milutin Ivković" Health Center in Palilula. 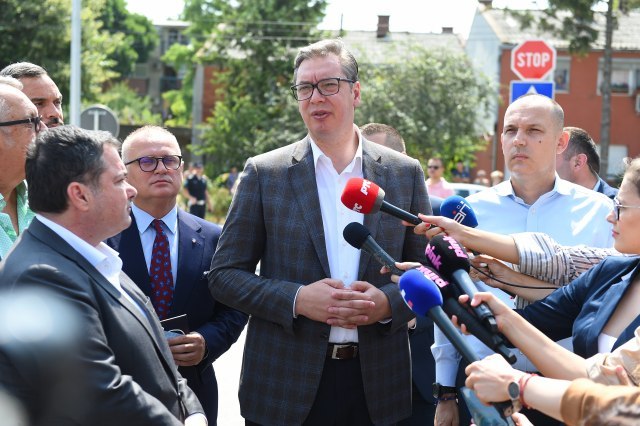 "Before the end of the year, we will start building the sewerage system on the left bank of the Danube," said Aleksandar Vučić on that occasion, adding that the necessary documentation for that project is now being completed.

"It will be a big and most important project, but we found the money and we will start with it soon," said Vucic.

The president said that traffic problems in that part of the city would be solved, that a new bridge would be built, and that the construction of a highway from Belgrade to Zrenjanin and from Zrenjanin to Novi Sad would soon begin.

"We will try to bring another important investor to this bank of the Danube," Vucic added.

"Everything we haven't done in the previous 30 years, we will do slowly now," Vucic said.

He said that new schools and kindergartens will be built in that part of Belgrade, as well as that a secondary vocational school and gymnasium will be built. "We will continue to build and work, and all that means a better standard of living for the citizens. You no longer have to go to the city center for medical check-ups," Vucic said.

He added that 70.000 health cards have already been transferred to the new health station in Borča and that there will be even more. "Here you have a modern equipment and wonderful doctors," said Vucic.

The total value of the works is more than 800 million dinars. Residents of the left bank of the Danube have been waiting for the construction of a health station in Borca for three decades. About 150 doctors and nurses will work in that health station, so that the citizens of Borča will have adequate health care, and it is designed for a population of 200.000 inhabitants.

At the laying of the foundation stone, in December 2019, it was said that the health station will include a service for health care of preschool and school children, adult citizens, home treatment and palliative care, women's health care, polyvalent patronage, X-ray and ultrasound diagnostics, dentistry, physical medicine and rehabilitation, and internal medicine units.