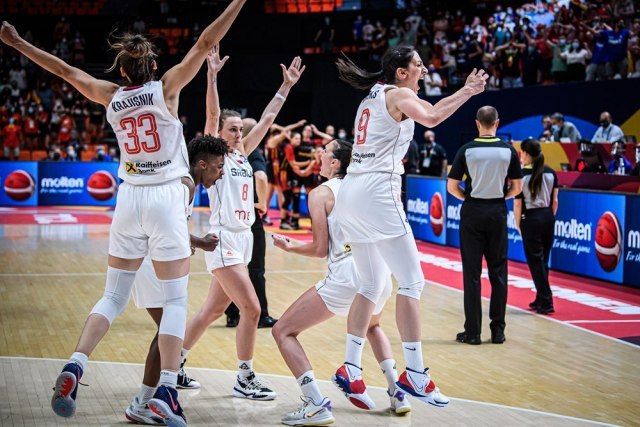 Serbia defeated Belgium 74:73 in the semifinals of FIBA Women's Eurobasket after a great fight.

Serbia will play against France in the final on Sunday, scheduled at 21:00.

Serbia entered the match fantastically. It was a recognizable defense of our national team, so our basketball players allowed Belgium only two points in four and a half minutes.

And then, a disastrous second quarter followed, in which they scored just nine points in ten minutes.

A reversal of the Belgians followed, who played the second section much better and finished halftime with a four-point advantage (32:36).

Yvonne Anderson started the second half instead of Ana Dabović and tied six points, so the score was even.

At the end of the third quarter, it was only +1 for Belgium, thanks to Sonja Vasić, who scored in the last attack.

And in the fourth quarter, we witnessed a real rollercoaster when it comes to the result.

In Serbian national team, Sonja Vasić took over the responsibility and played fantastically, while Nevena Jovanović joined her, so Serbia had a half a point advantage five minutes before the end.

In defense, everyone played great, especially Jelena Brooks in defense on the opponent's centers.

Our national team was led to victory by Sonja Vasić who scored 16 points and Aleksandra Crvendakić with 15 points.

It was dramatic in the end as both teams waited to see if the last shot of the Semi-Final beat the buzzer!

So, Serbia booked its second FIBA Women's EuroBasket Final appearance after winning the Championship in 2015.