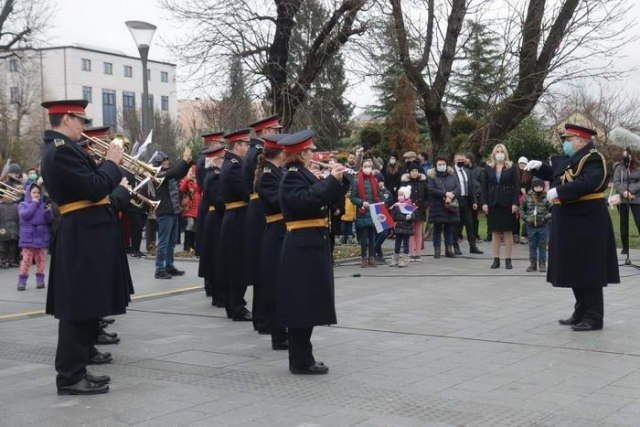 Selaković said that Serbia is obliged to do so not only by a convincing majority of citizens' opinions, but also by international law and the Dayton Peace Agreement, and from that follows the duty of Serbia to take care of the Republika Srpska.

"The Serbian people in Republika Srpska should be proud of what they have created. Republika Srpska can only be dismantled and diluted by the one who created it, because it is a historical and political factor and an unchangeable fact," Selakovic said in a video address at the ceremony in Banja Luka on the occasion of the Day of the Republic of Srpska.

The head of Serbian diplomacy pointed out that Serbia still respects the territorial integrity of Bosnia-Herzegovina, as it did in the past, "jealously guarding its special and parallel ties with RS and its Serbian people" and stressed that together with that, Serbia strives to build good and quality relations with the Federation of Bosnia-Herzegovina, and with the other two constituent peoples.

"Serbia wants to help our entire region, to become the flywheel of economic development, which will replace the label of conflict and difficult past with the attributes of joint and successful progress and a future worth working diligently and dedicatedly for," Selakovic said.

He stated that the common goal should be to keep pace with the developed part of humanity, with those who have progressed in all fields, while the peoples of this region have dealt with difficult and bloody conflicts, faced with the horrors of war and all the temptations that resulted.

The aspiration towards a society of European values, among other things, says Minister Selaković, is the desire to compensate for all that those difficult times left as consequences and that development ideas and opportunities are needed, "which we will not wait for, but which we will create ourselves", and energetic and enterprising, capable business people, investments - a technological connection with the rest of the world is needed.

"At no point in its development path has Serbia given up on its values ​​and its peculiarities. And the Republika Srpska should not do that either. Therefore, economic development is not an end in itself and a supreme good. It is a clear way to make the societies we live in better and more advanced, so that our children would not go out into the world in search of happiness, but remain among their own, in an environment that encourages values, such as talent, innovation and intelligence", Selaković said.

The supreme interest of the Serbian people in the time ahead, emphasizes the head of Serbian diplomacy, is fighting to preserve peace and stability, and that, as he notes, it must be our national project and our national structure, and Serbia and Republika Srpska must be unique, even when confronted in that struggle with those for whom those goals are not a priority.

"Serbian people are one and indivisible in terms of values, we are bound by our language, culture, history and tradition, worldview, heroic past, common ethics, love for freedom and our red-blue-white flag, and it is in the field of values ​​that we need to see what is the interest of the Serbian people in the years ahead", Minister Selaković said.

He asked if we should unite in a quarrel with others as some others have often done, or show that it is possible to do good when you do it not only to yourself but to everyone around you.

Precisely the latter, Selaković points out, was the guiding idea of ​​generations of our ancestors who always saw the fight for good in the fight for the good of all around them, not just themselves, and that we as a nation testified to how important it is for us to protect the dignity of ancestors, as we are fighting for the future in which our descendants will live.

"We are not a great nation in terms of numbers in the world, but just as Nikola Pašić once remarked - On the way from Vienna to Constantinople there is no or hardly any greater and more significant. And precisely for the fact that we are a significant factor in the regional sense, our responsibility for the future is very important and significant", Selaković pointed out.

Referring to the year of "great temptations and problems" that is behind us, Selaković emphasized that it showed that we could only fight the pandemic by supporting each other, without hurting anyone, without humiliating or doing harm to anyone.

Selaković wished the citizens of RS that the years ahead will be years of progress and success, years of victories, whose significance will be "measured by kilometers of highways, new schools, hospitals, factories."

He pointed out that Serbia and the Republika Srpska should continue to live in harmony and love, and that no one between us should dare to set up barriers and obstacles, where bridges and outstretched brotherly hands should stand.

"Dear brothers and sisters, dear citizens of Republika Srpska, by congratulating you on the Day of the Republic, I want this day, January 9, to be a day in which we will draw conclusions about how much we have helped Srpska, all its citizens and our entire nation, and that every year that conclusion is better and to the pride of all of us. WIsh you a happy Republic Day! Long live Serbia! Long live Srpska", Selaković concluded.