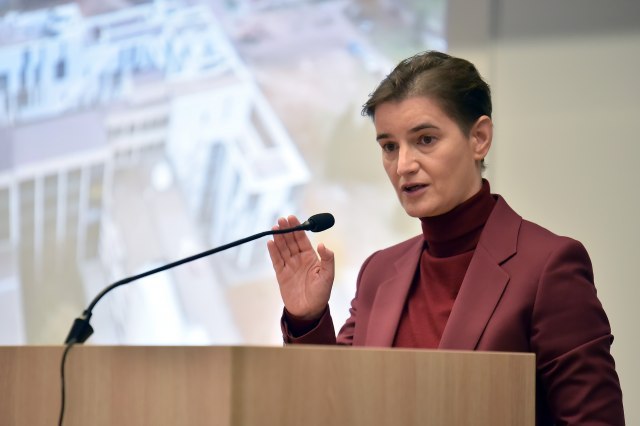 As the only condition, she stated that experts from the Crisis Staff must propose that measure.

She said that she would listen to the opinion and recommendations of the medical part of the Crisis Staff at tomorrow's session regarding the manner of holding classes in schools for older classes and the work of kindergartens.

"One of their recommendations was to consider online teaching for older grades, i.e. in primary schools from the fifth to the eighth grade and secondary schools," said Brnabić, answering a question from journalists after the opening of the Multipurpose Laboratory Lamella of the Electronic Faculty in Niš.

If that is confirmed tomorrow, Prime Minister says, they will be able to switch to online classes as soon as possible, because, she adds, everything is technically ready for that.

"I still think that, as far as the youngest students are concerned, it is safest for them in schools, but if the experts advise me otherwise, we have no problem adopting their advice," Brnabić said.

The same, she says, applies to kindergartens and adds that, if the expert council of the Crisis Staff is in favor of closing kindergartens, it will be done.

She reminded that there were problems in that regard in March, April and May, because a large number of people demanded the closure of schools and kindergartens, and then most of them criticized that measure and asked who would take care of the children now.

"I can't make decisions like that under public pressure, we have no problem doing that", Brnabić said. The experts from the Crisis Staff have to tell me that it's the right way, that it's safer than grandparents babysitting them at home. That's my main dilemma, but if the experts' advise is such, we have no problem introducing lockdown", Brnabić concluded.

"We'll find free beds, but who's going to treat the patients?"

"There are capacities in Belgrade to take care of all those who need hospital treatment, but it is important to know that there are not enough health workers", Prime Minister of Serbia, Ana Brnabić, said.

Today, at the opening of the multi-purpose laboratory lamella of the Electronic Faculty in Nis, she said that the health care system was overburdened, but that it was "still holding on".

Brnabić reminded that the COVID-hospital in Batajnica will be opened soon and appealed for respect to all prescribed measures.

"Those measures are an obligation and a recommendation, but it is important that each of us be responsible and keep contact to a minimum, until the vaccine arrives, which I hope will happen in December," Prime Minister said.

She also says that at this moment, it is pointless to say whether there are more beds in hospitals, because as she points out, that is not the point.

"We will find free beds, it is not a problem, but who will treat the patients?" Brnabić asked.