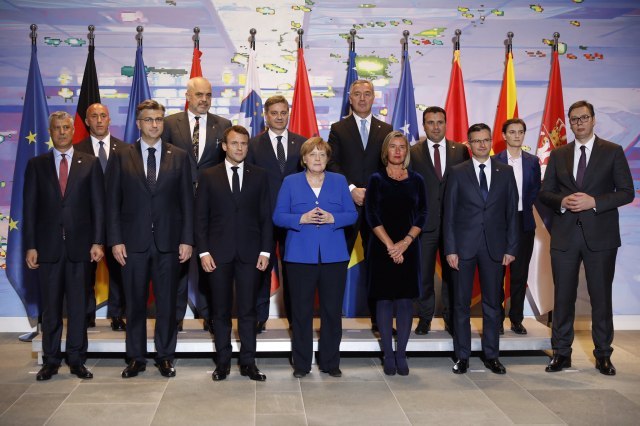 The Berlin meeting was organized by the president of France and the German chancellor, and it "emphasized the importance of a final, legally binding agreement on the complete normalization of relations between Belgrade and Pristina for stability in the region."

"Such an agreement is central to the path of Serbia and Kosovo to Europe," said the statement.

Although no joint conclusions have been adopted in Berlin, nor nave any formal documents been signed, the statement issued by Angela Merkel's office talks about the conclusions, i.e., the course and content of conversations.

Thus, the participants "agreed that such an (legally binding) agreement should be both comprehensive and politically sustainable and contribute to stability in the region."

The importance of an inclusive and transparent negotiation process was stressed, that should be accompanied by confidence-building measures.

The participants further "praised the successful conclusion of the agreement on the name dispute between Greece and North Macedonia as an outstanding example of successful conflict resolution."

The meeting was attended by Western Balkans leaders, together with the prime ministers of Croatia and Slovenia, and the high representative of the European Union for foreign affairs and security policy and vice-president of the European Commission.

The common EU perspective of the Western Balkans was addressed at the meeting, while the participants "agreed to step up their efforts to establish a regional economic area in accordance with the statement of the 2018 Sofia Summit and the Presidency Conclusions of the 2018 Western Balkans Summit."

According to the statement, they also "confirmed their commitment to cooperation within the framework of the so-called Berlin Process."