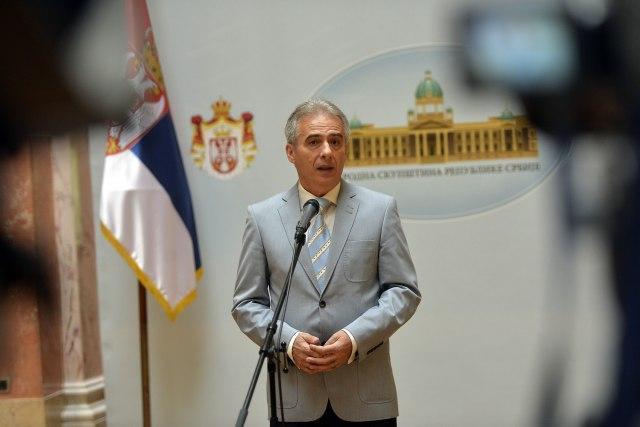 Drecun remarked that the investigation should perhaps be directed toward (Kosovo Assembly President) Kadri Veseli and (Kosovo PM) Ramush Haradinaj - "who immediately rejected having Serbian (investigative) organs included in the probe - while (Kosovo President) Hashim Thaci, in conversation with (Serbian President) Aleksandar Vucic, expressed readiness for our organs to be included."

"Should the investigation perhaps be directed towards Veseli and Haradinaj, not as the organizers, but as somebody who wants to hide what happened, and point the investigation in the wrong direction?," Drecun asked, and continued:

"This murder was done professionally. There are no clues, even the cameras recorded the perpetrators wearing masks. Only one wrong clue has been left, which is meant to distract us until they hide the key things, and that wrong clue is the car."

Considering that several days before Ivanovic was killed, the US State Department issued an advisory to US citizens about possible unrest in Northern Kosovo, Drecun continued, "if Washington really wants to contribute to shedding light on the murder, it doesn't have to offer FBI's assistance but give Belgrade intelligence information on which the State Department based its assessment."

"The State Department's assessment perhaps could lead to those who killed Oliver Ivanovic," the Serbian parliamentarian stressed.

He added that Serbia "could also ask for London for its information" and recalled that "increased presence of British special services has been noted during recent months, especially in the North of Kosovo."

"Their increased activity means they obtained some information, which may lead to this crime," Drecun said.

He stressed that Serbia "could get information about the perpetrator and those who ordered the murder on one side from Kadri Veseli, Ramush Haradinaj, and the SHIK (Kosovo intelligence services), on the other from Britain and America, and on third, which is often forgotten, from Albania and (Albanian PM) Edi Rama."

"Perhaps they could lead us to information about the perpetrator and those who ordered it. The question is whether it is in the interest of these three sides to submit information, I'm guessing not. It will be hard to solve the murder without intelligence information, because there are almost no clues," Drecun concluded.

Earlier, the Kosovo Interior Ministry issued a statement saying they had information about the buyer who in 2017 bought the vehicle in question.

"The Kosovo Police have identified the chassis number of a vehicle that was found in northern Kosovo and believed to have been involved in the murder of Oliver Ivanovic, and immediately through international channels managed to localize it in one EU country," the statement said.

According to the press release, the interior minister and the Kosovo police director informed the prosecutors that they would, through official channels, "seek international legal assistance from the Serbian authorities."

Previously, deputy Kosovo Police commander for the north Besim Hoti told Pristina media that "the last owner of the vehicle is living somewhere in Serbia - but there is no information about his nationality."

On Thursday, Serbian Police Director Vladimir Rebic confirmed that the car originally belonged to a Serb from Austria, who is long deceased.