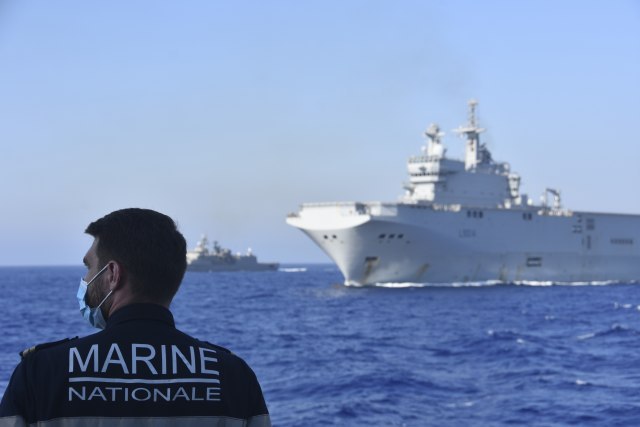 The eyes of the whole world are focused there because of the new, dangerous tensions between Athens and Ankara, RTS writes, referring to the Greek media.

Athens is demanding the deployment of American forces.

The close meetings of Turkish and Greek frigates, which have aroused passions in the eastern Mediterranean in the last 24 hours, have been replaced by the inflammatory rhetoric of Ankara officials, so Finance Minister Berat Albayrak said it was time for the new generation to pay the price of independence.

"Our leader did not give up. It is our duty. If they attack us, we will fight back. We will fight to the end," Albayrak said, daily Hurriyet reports.

The Turkish minister's statement followed a series of similar words by President Recep Tayyip Erdogan, who warned Greece that the fleet accompanying the research ship "Oruç Reis" would retaliate against any provocation by Greek ships.

Although the media in Greece and Turkey report a significantly growing number of fighter jets in the zone where several hundred incidents have been registered over the past year, it seems that the two fleets, after a close encounter between frigates, are still enough far away to avoid any future problems.

According to the Marintrafik website, which monitors maritime traffic, the Turkish flotilla and "Oruç Reis" were about halfway between Crete and Cyprus on Friday afternoon, with occasional confusing maneuvers.

Greece's "Ta nea" states that "Oruç Reis" changed course by 180 degrees, and that the next destination of the Turkish flotilla is not known now.

"Oruç Reis" changed course only 24 hours after the collision of the Greek and Turkish frigates during, apparently, clumsy maneuvering, which later led to serious accusations by the two sides and threats by Recep Tayyip Erdogan that Turkish ships would respond fiercely in the next such incident.

Tensions in the relations between Athens and Ankara provoked reactions, so France immediately sided with Greece and sent a helicopter carrier, a frigate and two "bursts" to the region. Athens was also supported by Israel, while Germany called on the conflicting parties to come to their senses.

Greece, meanwhile, has called on Americans to step up their presence in the Eastern Mediterranean. Greek Minister of Foreign Affairs Nikos Denidas requested a more significant engagement of American forces from US Secretary of State Mike Pompeo in Vienna, "Ta nea" reports.

EU in solidarity with Greece

Tonight, the foreign ministers of the European Union member states expressed "full solidarity" with Greece and Cyprus and called on Turkey for "urgent deescalation", after the Turkish ship started exploring for oil and gas in the disputed waters of the eastern Mediterranean.

EU High Representative for Foreign Affairs and Security Policy Josep Borrell wrote after the emergency meeting on Twitter that the EU expresses full solidarity with Greece and Cyprus and called on Turkey to urgently deescalate and return to negotiations.

Greek Foreign Minister Nikos Dendias, who met with US Secretary of State Mike Pompeo in Vienna earlier today, said he was "satisfied" with the solidarity of EU partners and their condemnation of "Turkey's illegal behavior".

"Turkey is the only (party) responsible for the escalation of tension in the eastern Mediterranean, and it must immediately leave the Greek continental shelf," Dendias said after Friday's talks. "That is a necessary precondition for deescalation."

The Turkish ship "Oruç Reis" began exploration two days ago in the disputed area in the eastern Mediterranean, rich in oil and gas, despite the opposition of Greece, which claims that the area overlaps with its continental shelf.

Turkish President Recep Tayyip Erdogan said earlier that Ankara would continue exploratory drilling until August 23, as planned, but after a telephone conversation with German Chancellor Angela Merkel, he hinted that Ankara and Berlin had agreed to "soften" the position when it comes to date.

However, he said on Friday that Turkey continues to work on oil and gas exploration in the eastern Mediterranean, because Greece has not kept its promises regarding those activities in the region.