At Sunday's ceremony in Paris marking 100 years since the end of the First World War, the place behind Vladimir Putin was given to Hashim Thaci. 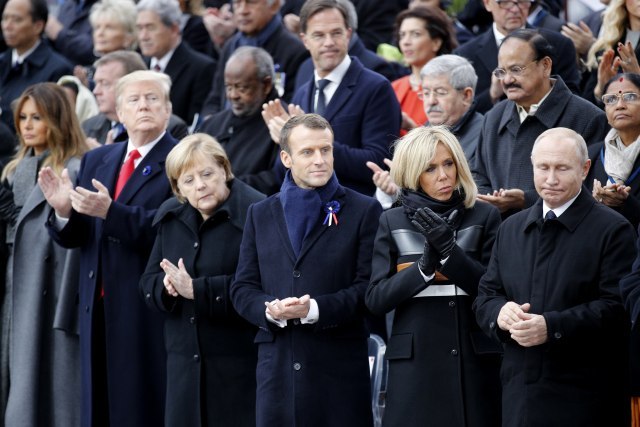 In Serbia, many are today commenting on this decision of the organizer, some calling it scandalous, while the media also write about "only the alphabetic order" being important.

Serbian President Aleksandar Vucic, who was also present at the event, said that "the protocol certainly did not reflect the balance of power."

When asked for comment on the fact some regional leaders were among the world's five most powerful countries represented at the ceremony, he noticed that Kosovo President Hashim Thaci won the best position of all in the region.

"The president of Croatia was standing there, I could understand, because it has to do with the alphabet. There might have been some sense to it, although they (Croati) were in the First World War on the opposite side (of the victors). There was no Austria near the five, but near me... ", said Vucic.

Dean of the Faculty of Political Science in Belgrade Professor Dr. Dragan Simic told Prva TV on Monday that a truly big scandal had occurred in Paris when it comes to the seating of the invitees.

As he added, this is in some way a revision of history, because in 1918 "some other victors were sitting in the front row."

He stressed, however, that efforts should be made to reconcile - but if what is not equal is being made equal at any price, then that leads to injustice.

As Milos Vlahovic, editor-in-chief of the B92.net website said, the whole event resembled a show rather than a ceremony.

"It has come to - instead of talking about the centenary of the end of World War I - talking more about who appeared, who did not show up, who was talking with whom, who was late, a reality (show) at the global level, and everyone is hurt by something. We have our story, our topic, other countries have their own. The Poles also did not show up," he said.

As Vlahovic added, he would like to find out what actually happened with the placing of the guests, while the idea of ​​using the alphabetical order does not stand to scrutiny when one looks at the seating arrangement itself.

"I think this was a message, whether a message addressed only to us, or to President Putin - I suppose they will not say," he added.