"Contingent of Pfizer vaccines in Serbia next week" VIDEO

The Crisis Staff for combating coronavirus in Serbia held a press conference. Citizens were warned at the conference not to do the antigen tests on their own. 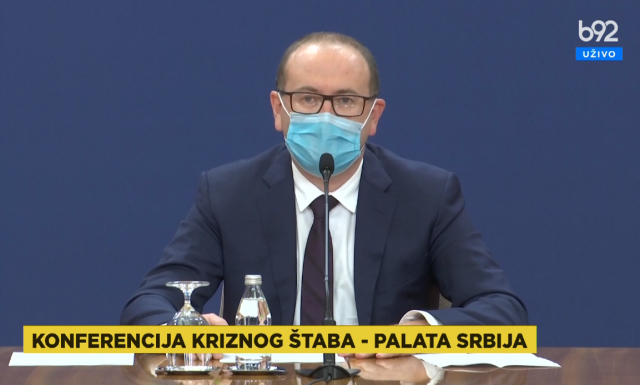 At the beginning of the conference, the Provincial Secretary for Health, Zoran Gojković, presented data on newly infected and deceased people in Serbia.

Gojković said that the current situation was analyzed at this morning's session. He reiterated that all measures that have been in force so far will remain until further notice.

The only novelty is that from December 20, passengers will have to have a PCR test to enter Serbia not older than 48 hours, which is a directive that was previously adopted by the Government of Serbia. "We managed to flatten the curve. Depending on the further number of newly infected, we will consider more restrictive and milder measures, depending on the situation", Dr Gojković said.

He reiterated that the measures, when it comes to cultural institutions, will certainly be relaxed from Monday.

"The problem is the employees in those institutions, as far as the audience is concerned, if they respect all measures, there is very little possibility of infection", Gojković pointed out.

Dr Gojković sent a special appeal to the citizens not to perform antigen tests alone. As he said, there is a possibility that the swab is not taken well, and one might get injured when taking the swab if it is not done by a professional.

"The vaccine arrives next week"

"We expect the first contingent of Pfizer vaccine to arrive next week, when it will be sent for testing in our laboratories," Gojković said.

As he said, after that, the vaccine will be able to be offered to the citizens in a legal way.

He added that other vaccines will gradually come to Serbia.