Minister of Education, Mladen Sarcevic, said that the distance teaching was successfully realized and explained that it is not serious to cancel graduation exam 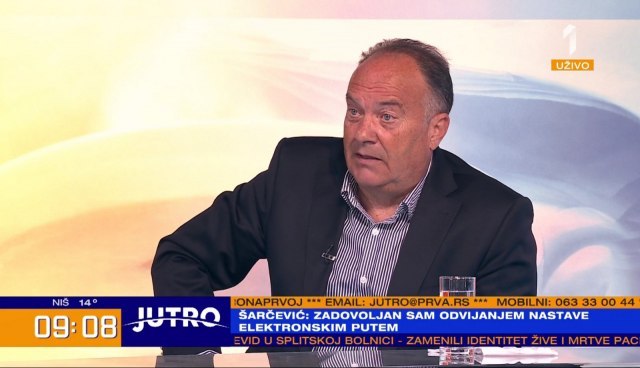 Minister Sarcevic told TV Prva that the recordings of lectures in schools were successful, but that for safety reasons, at one point they switched to recording classes from home, which also went great.

"On this occasion, the teachers learned how to question the students in some other way", the minister said.

He praised all those who participated in the realization of distance learning and said that he would advocate for those educators who are not employed on full time basis to be offered employment contract.

The minister said that after the first week, he reacted to the extensive homework that the teachers gave to students. He said that he believes that it did not happen intentionally, but because of adapting to the new working method.

"We are now doing a study to see how parents understood it, as well as how teachers understood it, so that we know who else to train in order to implement the education reform that has begun," he added.

The final exam will be held on June 17, 18 and 19, while the results will be announced on June 23, and the minister explained that the exam dates have not been moved in relation to the previously made calendar.

The realization of the small graduation exam will differ, though, because it will not be held in sports halls as before, but due to the prescribed measures, there will be fewer students in classrooms - four square meters per student and a teacher on duty, Minister Sarcevic said for Prva TV.

"Eighth-graders will receive two tests during the first week of June, which they will complete at home, as their knowledge test, and we have prepared tests for the small graduation exam. Everything is completely safe when it comes to printing tests," the minister explained.

He added that 8.000 children applied for enrollment in schools for the especially gifted, such as math, bilingual or sports high schools as well as ballet, music and other art schools.

The Minister emphasized that the cancellation of the small graduation exam will certainly not happen.

"That is unfair and it will not happen," the minister said clearly when asked about the possible cancellation of the final exam test after certain number of parents and students opposed it.

Minister said that he would do everything he could to resolve the issue of paid excursions, but that it was more a matter for the Ministry of Tourism to deal with.

As he explained, no European country canceled the graduation exam, moreover, students were invited to get back to schools.