"Next week the decision regarding pensioners, half an hour walk, 300 m from home"

Serbian President Aleksandar Vucic said that new hotspots were recorded in Serbia, and that the worst situation was in Pozarevac 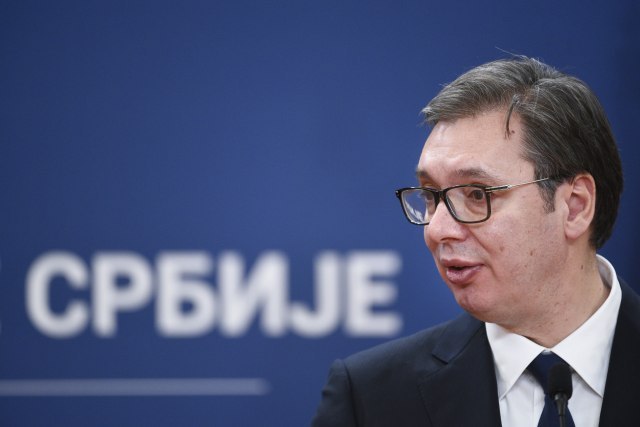 "We have problems in areas where people from different parts of the world arrived on March 13 and 14," Vucic told Radio-Television Serbia.

He said our hospitals are crowded.

He said that the most difficult situation is still in Cuprija, adding that the Pomoravlje region is critical, together with Krusevac, Varvarin and Cicevac, which are the hotspots of the contagion.

"The new hotspot, much more serious than we had hoped for, is Pozarevac, which is becoming a major hassle," he said.

Talking about the hotspots of the virus, he said that the south and southeast had become problematic, and that the situation in the west of Serbia was better.

He also said that Belgrade is on average in terms of the number of newly infected.

Speaking about curfew over the weekend, Vucic said the decision would be made in half a day.

"I think it's going to be that people can get everything they need on Good Friday, and curfew will start at 5 pm on Friday, lasting until 5 am on Tuesday. Monday is definitely a non-working day," Vucic said.

He added that he had talked to the patriarch and trusted him, and that he would ask him to understand the situation.]

"I will try to speak to the patriarch and the people from the Synod tomorrow. I don't have any doubts, though, I will support the doctors and the life. We don't have in mind to arrest bishops and clergy," he said.

"I will kneel before him to adopt this, not because we are arrogant and haughty, but so that life can win over death," he said.

Vucic added that the decision that children with autism can go outside whenever they wanted would be in effect, not just from 6 pm to 8 pm, as announced earlier.

"We are looking for a way to allow pensioners to go out at least 3 times a week, but for that we have to set aside 8 hours," he said.

As he stated, he wants to set aside 8 hours a day at the time of curfew for the pensioners to go out, but they must not be in contact with others.

"Next week, a maximum of half an hour's walk, up to 300 meters from home," Vucic announced.

He is aware that the oldest, after a month's stay in apartments and houses, are losing patience and that it is difficult for them, but reiterates that everything was done to preserve their lives and not to put them at risk.

Vucic added that he is happy that the majority of pensioners over 65 years of age are disciplined to comply with state measures.

"We will provide a mask to any pensioner who doesn't have it. And again we will ask them not to go out if they do not feel the need," he stated.

He said he spoke with Chinese President Xi Jinping, which is a great honor for him.

"I asked him to allow us to buy more medical devices, not because we don't have enough, but because I want to be sure," Vucic said.

He said he received assurances from the Chinese President that he would consider his petition.

"Our enemy is scary," Vucic warned, recalling Predrag Kon's words that the virus is our enemy.

He added that he fears for the health of all the people who got infected in the Nursing Home in Nis.

"Surrender is not an option, we will win this, we will fight. I want to thank people for respecting life, the state. The state fights for them. We will win this faster than many people think, but we need discipline," he concluded.

Vucic said he was pleased that epidemiologist Predrag Kon remained at the crisis staff.