What happened must not happen again - EU on Kosovo incident 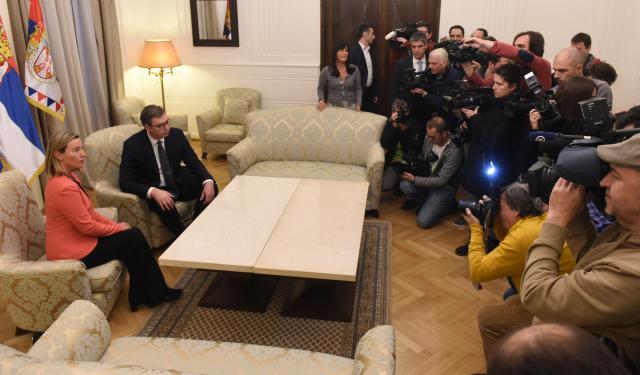 A statement issued by the Presidency after the meeting said it took place in order to discuss "in an open and frank way" the latest developments, "and the future of the EU-facilitated dialogue for normalization of relations between Belgrade and Pristina."

It added that Mogherini "deplored yesterday's (Monday's) events in Kosovo" and said, "What happened yesterday must not happen again. The European Union expects calm, wisdom, and restraint."

The statement also said that the two interlocutors "agreed to find new ways to continue working and resolving peacefully issues between Belgrade and Pristina" and that it was "in the national and state interest of Serbia to preserve stability, peace and to progress on the EU path."

Mogherini came to Belgrade on her way back from a conference in Tashkent, in order to discuss with Vucic the future of the dialogue with Pristina in the wake of the arrest in Kosovo on Monday of the head of the Serbian Government Office for Kosovo and Metohija, Marko Djuric.

Late on Monday, she spoke on the phone with Vucic, and with Kosovo President Hashim Thaci.

On the same day, the EU "voiced its regret over the events in Kosovo and called on the authorities in Belgrade and Pristina to show the necessary restraint and maturity to prevent the situation in Kosovo from escalating and to solve problems within the EU-mediated dialogue."

Serbian Foreign Minister Ivica Dacic on Tuesday called a meeting with ambassadors and heads of missions of international organizations in Belgrade, when he presented the complete documentation about the incident.

Also on Tuesday, the Serb List announced it was leaving the Kosovo government, and would start forming the Community of Serb Municipalities (ZSO) in Kosovo on April 20. Kosovo Prime Minister Ramush HAradinaj reacted to this by saying he hoped they would "change their decision."