"If dialogue means recognizing Kosovo - then thanks, bye"

Serbian President Aleksandar Vucic spoke in Davos on Thursday with the president of the interim institutions in Pristina, Hashim Thaci. 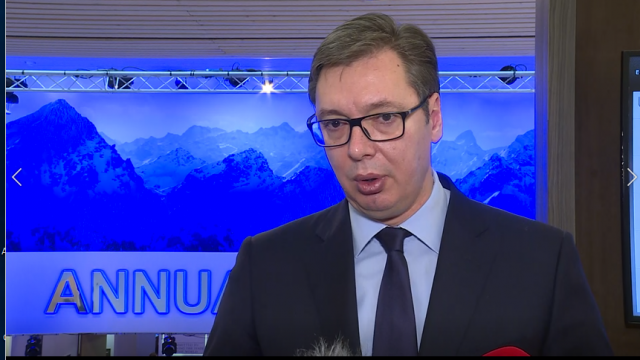 Vucic said that he "does not understand why they (Pristina) accepted only information exchange when it comes to the investigation into the murder of Oliver Ivanovic" - but that he "hopes they will find his killers."

The Serbian president also said that it was important to talk, and that he was "thinking about the future of the Serb and of the Albanian people."

"We had meetings with Albanians who are represented here in line with what has been agreed - i.e., Kosovo, asterisk, (UN Security Council) Resolution 1244," the president said, apparently referring to an agreement reached in 2012 on the use in regional forums of the term "Kosovo" without prejudging the final status of Serbia's southern province, where ethnic Albanians in 2008 unilaterally declared independence - a move Serbia considers a violation of its territorial integrity and sovereignty.

"Yes, our relations are being talked about and it's not an easy year ahead of us, anyway. Since I am unable to comment on the stupidities that some people on the Serbian political scene are uttering - we must decide what it is we can do, what it is we want, what it is we want to do with ourselves. To have a real, serious and responsible approach, in future. To lose the least we have to, and get the most we can, and I've said it countless times that the situation where Pristina and we are negotiating must be such that both sides end up somewhat dissatisfied and angry," Vucic has been quoted as saying.

"If someone thinks that they can get everything, while the other side gets nothing - I think that's the wrong way and that will never lead to any solution," he continued.

If somebody thinks that the idea of the process of normalizing relations between Belgrade and Pristina means merely Serbia having to recognize Kosovo, and that's that - "then - thanks, goodbye," the Serbian president said.

This was Vucic's reply, when asked about the possibility of organizing an international conference "to solve the issue of KiM (Kosovo and Metohija) - instead of "the long-drawn suffering in Brussels, that has been ongoing for years" - a reference to the EU-sponsored Kosovo talks that started in 2011.

The president said that he was not rejecting the possibility in principle - although he shared that he was "afraid that a possible conference would end without reaching an agreement."

Whatever format the negotiations take, Vucic continued - "somebody has to show good will, understand that compromise means more than just expecting a format where you get everything" - something that, he observed, "Thaci expects."

Instead, concessions must be made by both sides, the president said.

"If you are capable of doing that, we are ready to talk. If you say, 'Serbia must recognize Kosovo and that's that' - then thanks, goodbye," Vucic said.

Asked whether Pristina was ready for compromise solutions, he said he was unable to speak on their behalf.

"They'll be there in the corridors, I see they have plenty of free time - ask them," Vucic told reporters in Davos on Thursday.