Serbia on Monday during an intergovernmental conference in Brussels opened two more chapters in its the EU accession negotiations. 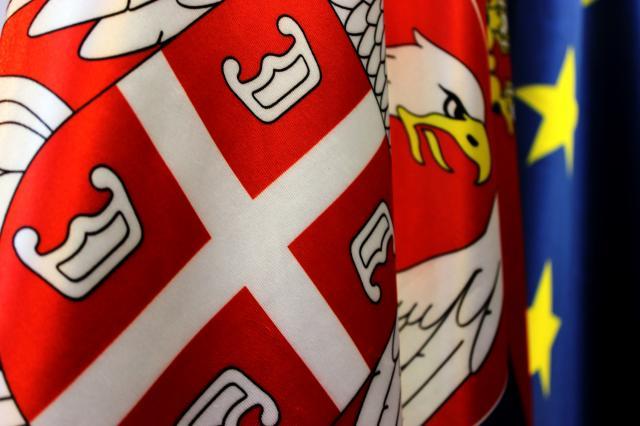 Minister for European Integration Jadranka Joksimovic presented Serbia at the Seventh Intergovernmental Conference in Brussels on Monday, at which two negotiation chapters were opened: 6 - Company Law and 30 - Economic Relations with Foreign Countries.

After the Intergovernmental Conference, Joksimovic spoke at a joint news briefing with European Commissioner for the Neighborhood Policy and Enlargement Negotiations Johannes Hahn and Minister of Foreign Affairs of Estonia Sven Mikser and assessed that this is good news, which will benefit both the economy and the citizens of Serbia.

"This tonight is a message that the door of the EU remains open for Serbia," Joksimovic said.

She noted that it is important that the dynamics of the opening of negotiation chapters continued, which shows the stability of the reform processes in Serbia, which should be accelerated, as well as the European path, because of the promises made to citizens.

Serbia needs to be trusted, there is no need to doubt its European orientation. The European path also has its ups and downs, but with a greater commitment from both Serbia and the EU, Serbia has a European future, Joksimovic said.

Speaking about the two newly opened chapters, Joksimovic emphasized that it is important to send a message in a concrete way to all potential investors that Serbia is a stable country and that there is a good protection mechanism for all those who want to invest in it.

Hahn welcomed Serbia’s opening of two new chapters - 6 and 30, and stressed that Serbia's attention in the future must be focused primarily on the rule of law and on the normalization of relations with Kosovo.

The opening of these chapters shows Serbia's serious work and that the European perspective is solid and real, Hahn stated.

He said that when it comes to the rule of law and the normalization of relations with Kosovo, Serbia’s greater work on this has been noticed, but the challenges still exist.

Serbia must make progress with regard to the independence of the judiciary, freedom of expression, the media, the rights of national minorities, the fight against corruption and organized crime, including money laundering, Hahn said.

According to him, the process of joining and opening the chapters cannot be achieved without an essentially tangible focus on the rule of law and dialogue with Pristina.

He said that although Serbia had prepared itself for the opening of five chapters and opened only two, he is not dissatisfied with that, adding that the opening of other chapters is in preparation, and by that time special attention should be paid on the rule of law.

Speed is important, but quality is more important. This is what counts, he stressed, adding that chapters 6 and 30 were opened on the basis of the consensus of all.

Hahn congratulated Serbia and the Serbian negotiating team on success and explained that companies will have the most benefit from the opening of these chapters, which can provide new jobs for the citizens of Serbia.

He also emphasized that this stimulates the economy, increases business safety, improves the business environment and accelerates the arrival of investments.

Sven Mikser, the Minister of Foreign Affairs of Estonia, the country that holds the EU presidency, said that by opening two new chapters it is clearly shown that Serbia continues to progress in accession negotiations with the EU, but noted that the pace of negotiations will continue to depend on the progress in normalizing relations with Pristina.

Mikser expressed the hope that the enlargement process will run smoothly and that Serbia will soon open new chapters – 9, 13 and 33 specifically.

The challenge for Serbia, he said, is the progress that our country needs to achieve at the same time in the reforms in relation to Chapters 23 and 24, which are the most important when it comes to the rule of law.

The speed of accession negotiations will also continue to depend on progress in normalizing relations with Kosovo, Mikser pointed out.

He also recalled that Bulgaria will soon take over the EU presidency and concluded that Chapter 9 on financial services, Chapter 13 on fisheries and Chapter 33 on financial and budgetary regulations will be within “Serbia’s reach".

Beta reported that Chapter 33, as earlier said by sources in the EU in Brussels, has not been opened as five EU member states had had objections to the pace of reforms in Serbia, particularly in the domain of the rule of law, curbing corruption and judiciary reform.

Germany, France, Sweden, Great Britain and Croatia were explicit that it would not be meaningful to open Chapter 33, which is connected with the effective functioning of the rule of law, the independence and effectiveness of the judiciary and the systemic curbing of corruption.

According to Tanjug, reporting earlier in the day, analysts find it particularly interesting to see how chapter 30 will be solved, because it means that Serbia can no longer have bilateral and duty-free contracts as it does now, for example with Russia.

EU member states have decided to allow Serbia to open two more chapters, which will bring the total to 12. Prior to the final decision to open new chapters, member states, as usual, considered the progress of Serbia under chapters 23 and 24, concerning the rule of law reform and the process of normalization of relations with Pristina.

Tanjug said it learned from diplomatic sources in Brussels that all member states were not satisfied with the overall progress Serbia has made in completing the chapter 23 action plan dealing with judiciary reforms, anti-corruption policy, fundamental rights and EU citizens' rights. On this basis, a "political decision" was made for Serbia to open two instead of three new chapters.

Tanjug said that the EU "expects that in the first part of 2018, Serbia will be able to open at least three new chapters, including 33 on financial and budgetary provisions, 9 on financial services and 13 on fisheries." These three chapters are already in the Council's working bodies. It is also expected that in 2018 Serbia will submit to Brussels negotiating positions for these additional chapters.

EU officials have repeatedly announced that 2018 would be extremely important for progress in the enlargement process, the agency said.

They say in Brussels that the renewed momentum and EU's commitment to enlargement must be made us of by the region by working on internal reforms and regional cooperation.