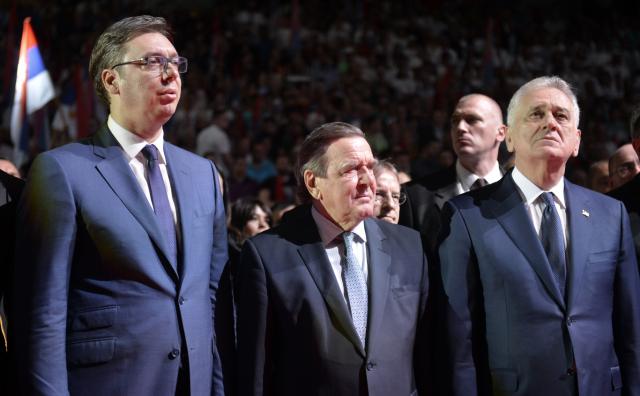 At the same time, Popovic, the presidential candidate of the opposition DSS party, noted that he was backed by "Vojislav Kostunica and the patriots" because they care about "Serb freedom above all else."

Kostunica is the party's former leader, who in the past served as the country's president and prime minister.

Popovic was campaigning in the town of Krusevac when he described Schroeder as "the first German chancellor after Adolf Hitler who decided to attack a country."

Vucic also criticized Vucic for inviting Schroeder to his election rally in Belgrade on the anniversary of the start of NATO's 1999 attack on Serbia.

"In 1999 he (Schroeder) bombed us with cluster bombs, killed our children, targeted us with depleted uranium. On March 24 this year he supported Aleksandar Vucic. Such people, including Schroeder, while they're in office, should be officially received and heard. Once this is no longer the case - only a person who is equally not a friend of Serbia could receive him for a private, party visit, and include him in his election campaign, on the day of the start of NATO's aggression," the DSS said in a statement, citing Popovic.