Serbian and Swedish officials signed an agreement on police cooperation in Stockholm on Tuesday, the Serbian government has announced. 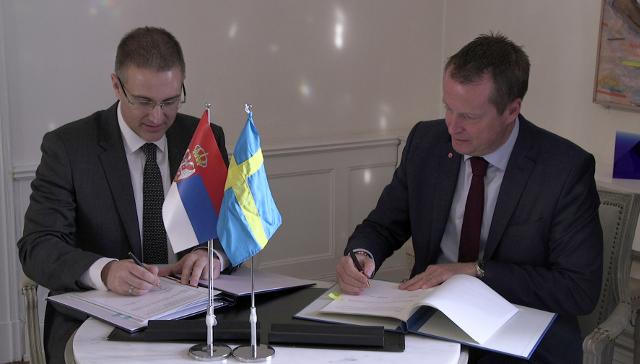 The document was signed by Serbian Deputy Prime Minister and Minister of the Interior Nebojsa Stefanovic and Swedish Minister for Home Affairs Anders Ygeman.

Stefanovic said after the signing of the document that it will enable a more intensive cooperation between Serbian and Swedish police in the fight against organised crime, terrorism, and illegal migration.

"Owing to this agreement, in the coming days there will be closer contact between our police forces and stronger cooperation in the fight against organised crime, terrorism and illegal migration, which will result in a decrease in crime rates," he said.

Stefanovic "expressed gratitude to Sweden for its support to Serbia on its path towards the European Union, as well as for the enormous assistance that this country has provided to Serbia."

Ygeman said that Sweden would "continue to support Serbia on its path towards the European Union, stating that the joint fight against organized and all other forms of crime is very important."