Serbia will not give up on prosecuting all persons accused of war crimes until they have been brought before justice, says Marko Djuric. 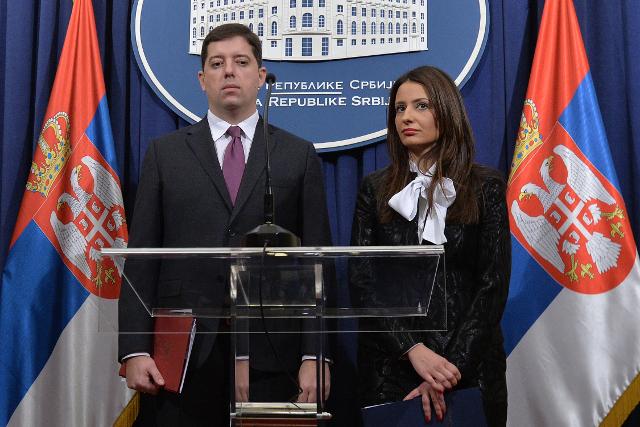 The director of the Serbian Office for Kosovo and Metohija spoke in Belgrade on Friday, after an extraordinary meeting of the government dedicated to Thursday's decision of a French court to release Ramush Haradinaj from jail pending a decision on Serbia's extradition request.

During the news conference, Djuric read out a part of the war crimes indictment against the Kosovo Albanian politician, a former KLA commander and Kosovo prime minister, noting that Haradinaj "personally took part in the torture, murder, and rape of civilians."

"Is the EU founded on the values based on the rule of law? We're not talking here about the things that Haradinaj was on trial for before the Hague Tribunal," Djuric said, referring to the Serbian indictment.

Djuric also said he was "surprised that Serbia is criticized for something while a criminal like this is free," and added:

"Is it possible that a man who is responsible for the murder of children is being released, those who carried out an aggression against Serbia. I wish to say this time that we believe in the justice system of France. Serbia is sending out a warning that it does not accept fake justice, according to which killings and crimes are allowed if they're in the interest of great powers. As France acts on Serbia's warrants, so we will act on theirs."

"Serbia is calling on all EU members to respect international law and is demanding Ramush Haradinaj's urgent extradition," Djuric stressed.

Serbian Justice Minister Nela Kuburovic also spoke during the news conference, to say that France was under an obligation to act on Serbia's extradition request "even without the Interpol notice."

She stressed that Serbia was not giving up on its extradition request and is hoping that the French judicial organs will act "professionally, and according to the conventions that they signed themselves."

"The entire international community is under an obligation to prosecute war crimes suspects," Kuburovic added.

Speaking about the Haradinaj case, she said Serbia wants to put him on trial for the crimes committed against Serbs and Roma, and also those ethnic Albanians who refused to collaborate with the KLA ("Kosovo Liberation Army").

Kuburovic stressed that, although his lawyers argued that he had already been acquitted by the Hague Tribunal "for the same crimes," the Hague case concerned the crimes committed from March until September 1998, while the Serbian indictment covers mostly those committed in June 1999.

The Serbian War Crimes Prosecution has expanded its investigations, gathered more evidence, and has about 30 new witnesses, she told reporters.

"If the French organs' response is negative, our judicial organs will continue the procedure in the Haradinaj case," the minister said, and added:

"The conclusion is that we will adhere to the reciprocity rule - as other countries act on our warrants, so we will act on theirs."

Asked "whether this means that terrorism suspects that have warrants out for their arrest won't be arrested," Kuburovic replied: "It all depends on each concrete case, and doesn't mean somebody won't be detained, but that further actions will be reciprocal."

"France will adhere to values"

Serbia will not give up on prosecuting Alliance for the Future of Kosovo leader Ramus Haradinaj, and will continue to seek his extradition from France, Foreign Minister Ivica Dacic said on Friday.

"We think the EU has some principles, hopefully, and that is punishment for war crimes," Dacic told reporters in Belgrade, expressing his "confidence France would adhere to such values."