Belgrade Mayor Sinisa Mali said on Monday, as a new protest was organized and his resignation sought, that he would not step down. 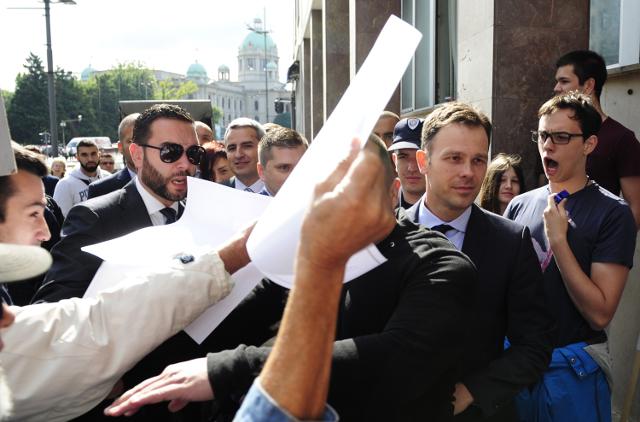 "Around 50 people, who attacked me with a pole, who want to beat me up, are asking for my resignation. I will not resign because of people like that, for the sake of the majority of citizens who voted in the local elections in favor of this policy," Mali said at the City Assembly.

He added he was "shocked by the assault of supporters of the 'Let's Not Drown Belgrade' initiative against him, and against the councilors and the police." Mali also expressed his concern for the safety of his family.

He added that he had invited members of the initiative to a meeting "because the street is not the place for it," and that he "respects different opinions and their desire to express their opinion through peaceful democratic protest."

"These people are fighting against Belgrade Waterfront. They do not like that project, and we accept that, but that project will change Belgrade and Serbia and we are fighting for every job," said Mali, adding that this will be the case "for as long as he is at the city's helm."

As he said, he found the fact the protest was organized in the middle of the working day on Monday morning to be "the most surprising."

Asked which top city officials were responsible for the April demolition of buildings in Herzegovacka Street, in Belgrade's Savamala district, Mali said he "does not know" and that neither himself nor any other official were running away from responsibility - but made the plea that relevant services of Serbia, the prosecution and the police, be respected.

"Do not put pressure on them, let them do their job thoroughly, whatever they say, we will honor," said Mali.

Earlier in the day, citizens participating in the "Lets Not Drown Belgrade" initiative gathered in front of the city hall, where they came to deliver Mali's "dismissal letter," as well as the one they prepared for City Assembly President Nikola Nikodijevic.

They booed and shouted "thieves!" as the two officials were entering the building. This later turned into scuffles at the very entrance to the building, when the police started pushing citizens, some of whom were elderly, back from the door.

The protesters then began to shout "killers," and, "who are you protecting."The situation calmed down a few minutes later.

The pushing at the entrance was described as Mali as an attack against him. Tanjug reported that "an unidentified object" was thrown at the mayor, and that a man lunged at him.

Dobrica Veselinovic, a representative of the initiative organizing the protests, denied that its activists had attacked Mayor Mali.

"No. That did not happen. We handed him the dismissal letters," Veselinovic said, adding that they "did not see the injured policeman that Mali spoke about."