Vucic talks about Savamala case, composition of next cabinet

Prime Minister Aleksandar Vucic said late on Sunday that "everything related to the events in Savamala will be known in seven to ten days." 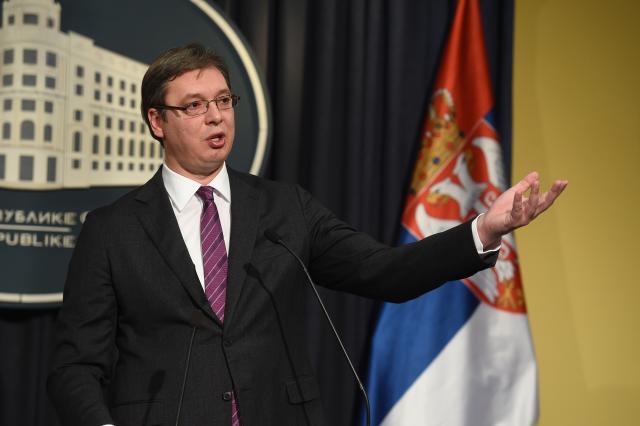 According to eyewitness accounts, unknown masked persons in late April demolished several buildings in this part of Belgrade.

Vucic told Belgrade-based Pink TV broadcaster there would be "criminal and misdemeanor complaints" in connection with the case - "and if need be, also the political responsibility."

"We are going to investigate and establish (what happened), I think now I know today much better than ten days ago what happened," said Vucic.

He added that "between nine and 11 masked men, not 30, as was originally stated" participated in the demolition, and that according to testimonies from 11 witnesses, "no one was tied up, but four phones were confiscated and returned after ten minutes."

Two witnesses said that some of those taking part in the incident wore balaclavas, according to Vucic.

"We'll paint the whole (picture) and we will tell people the truth, no matter how unpleasant for us," said Vucic.

He added that he "heard much from expert journalists supported by Brussels" who think the state would find a few criminals who would accept the blame in the case in exchange for leniency for their previous acts - but denied that such a thing would happen.

Vucic said he was wrong to say that the buildings torn down in Savamala were owned by criminals - "but they were certainly swindlers who worked for personal gain, and against the state."

Vucic then addressed the question asked by a great number of viewers of the program - namely, why he compared the Savamala case and the arrest of former President of Serbia Slobodan Milosevic. "I am speaking about the use of balaclavas, and did not compare these two events," he replied, and added:

"I watched criminals arrest former President Milosevic, those were criminals and murderers of the Zemun Clan, they did not work for the state, while we do not have any 'contract' with Zemun Clan killers."

Vucic also noted that it was "incomparable with Savamala."

Speaking about the Belgrade Waterfront project, he described it as "the best possible" - and one he would "not allow to be destroyed, although the campaign against it is financed from abroad."

Vucic said the motive of this campaign was "money" - "because it (Belgrade Waterfront) is a project that will hire people and bring in revenue to Serbia, not somewhere else."

"Let's see who these people are, who is behind these stories, who is Simon Simonovic, it's the European bloc with no alternative or something like that, known for pasting over billboards that read 'Kosovo is Serbia', I guess he does not like that Kosovo is Serbia. The other one is the second closest associate of Borka Pavicevic, that's that Lazovic, and also that Ilir Gashi, he also plays some role, and the fourth one is the guy from Transparency," Vucic said.

Speaking about the post-election period, the SNS leader said his party's official, Maja Gojkovic, will continue to serve as president of the National Assembly of Serbia.

As for SPS leader Ivica Dacic, who served as his first deputy and foreign minister in the previous government, Vucic said he "still does not know" if Dacic will continue to be a member of the cabinet.

He described Dacic as "the best technologist of power" because he "loves power and power loves him" - and that "precisely for that reason he knows very well that the composition of the future government cannot be affected by anyone from the outside" - this speculation emerged after Vucic's meeting in the Kremlin with Russian President Vladimir Putin last week.

Vucic said his meeting with Putin came about "quite by chance, and not on the occasion of the formation of the government."

But he would not reveal "the chance reason" in question, denying at the same time he was in Moscow for medical treatment, and noting that "citizens should be proud of him" because he is able to meet with the likes of Putin, Merkel and other leaders "at any moment."

Asked whether the LDP party will join his government, Vucic said it was "not easy" to form a government with that party, but that he would talk with them and with others - "but not with circus performers."

Asked whether the government would be a broader coalition, Vucic did not answer, but said he wanted to form it by June 16, "certainly before the arrival of the president of China to Serbia, who should come by the end of June."

Vucic also said that he "knows" whom he will support in next year's presidential election, but did not reveal the name.

Speaking about the April 24 elections, he said his party would request the formation of a committee in the Serbian parliament that would examine the regularity of the process.

Speaking in the context of the recent sackings and departures of journalists from Vojvodina's provincial public broadcaster RTV, Vucic said he "brought nobody to RTV," and remarked that he has not even been a guest on any of its programs "in years."

He then added that long-time employees of RTV have been saying that the Democratic Party (DS) - that was in power in Vojvodina until the April 24 elections - "not only appointed the managerial and editorial staff, but would also replace them each time the balance of power within the party changed."

During the interview, Vucic also revealed that a monument would be unveiled in Belgrade to Zoran Djindjic on the 15th anniversary of his assassination.